Little past midnight we arrived in Skutec. Our original plan was to spend the night in beautiful town of Kutna Hora. Somehow with our short booking window and the late hour of looking for accommodation on Airbnb, we ended up grossly underestimating the distance between the two towns by a small 70 km. On the interesting side, nothing could beat our home for the night in Skutec. 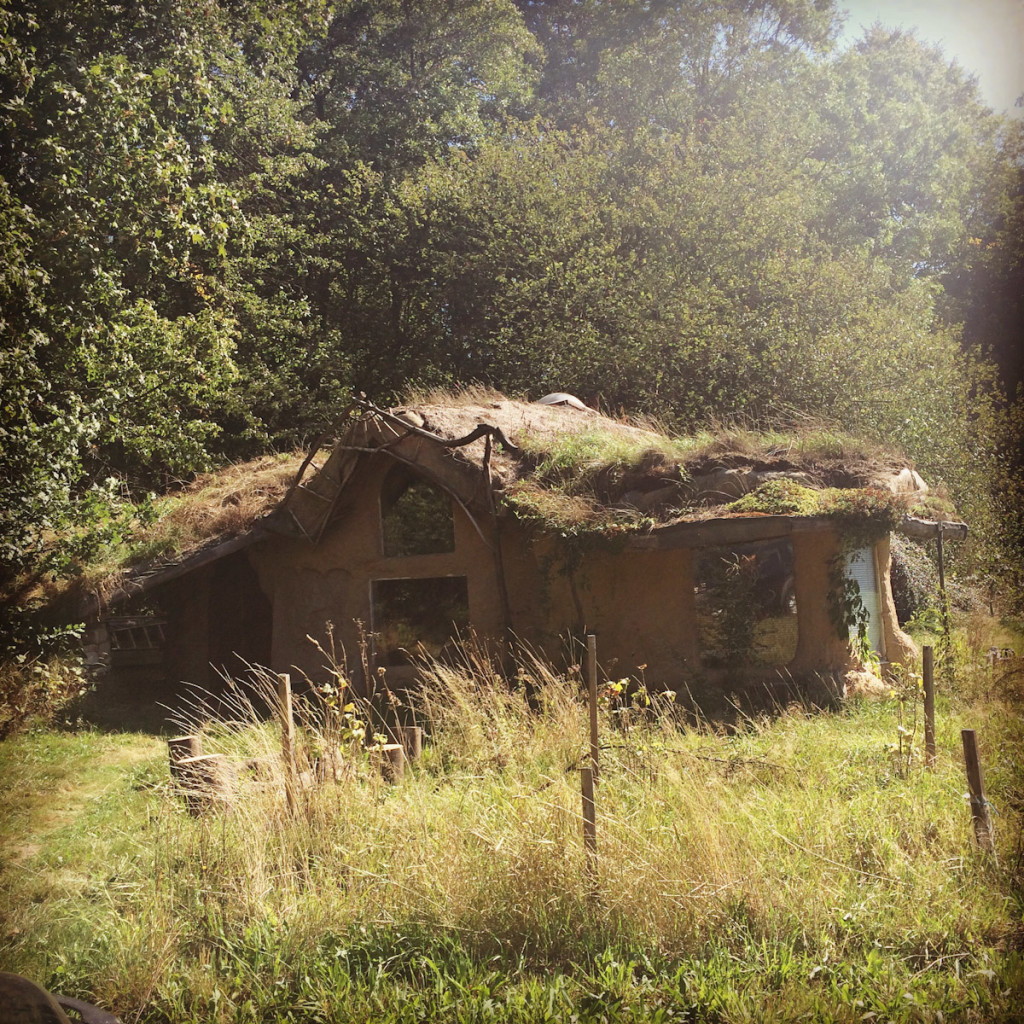 A picture says 1000 words. I hope this picture we took of our home in the morning sun is able to convey a little bit of that experience. A mixture of a clay hut and a nomad Mongolian tent, hand-made by our kind host Jan and his friends. Inside there was a mismatch of all kinds of furniture and hammocks occupying all nooks and crannies of the hut. The toilet was a dry closet, a polite way of saying hole in the ground. Quite an experience!

As it was a weekend, the local car workshop was closed in Skutec, so Kutna Hora, with its Bohemian charm stayed as an unexplored point on our paper map. Driving backwards with a car, whose behaviour couldn’t be quite predicted judging by its capricious actions of the day before was not an enticing option. Hence, forward lay the road. In the August heat across the Czech countryside to Olomouc in Moravia.

There is something very charming about Czech architecture. The cities feel like they are taken straight out of medieval fairy tales, the cobblestoned narrow streets, the colourful, beautiful buildings that are adorned with details ready to mesmerise you. Prague, the Czech crown jewel is of course hard to beat. But don’t underestimate the beauty that awaits you in the rest of the country. Beauty that is no less charming and comes with no tourist crowds.

Olomouc is one of these small gems. We arrived in the city boiling in the heat to find charming streets, void of people, who probably had taken refugee in their homes to escape the summer heat. 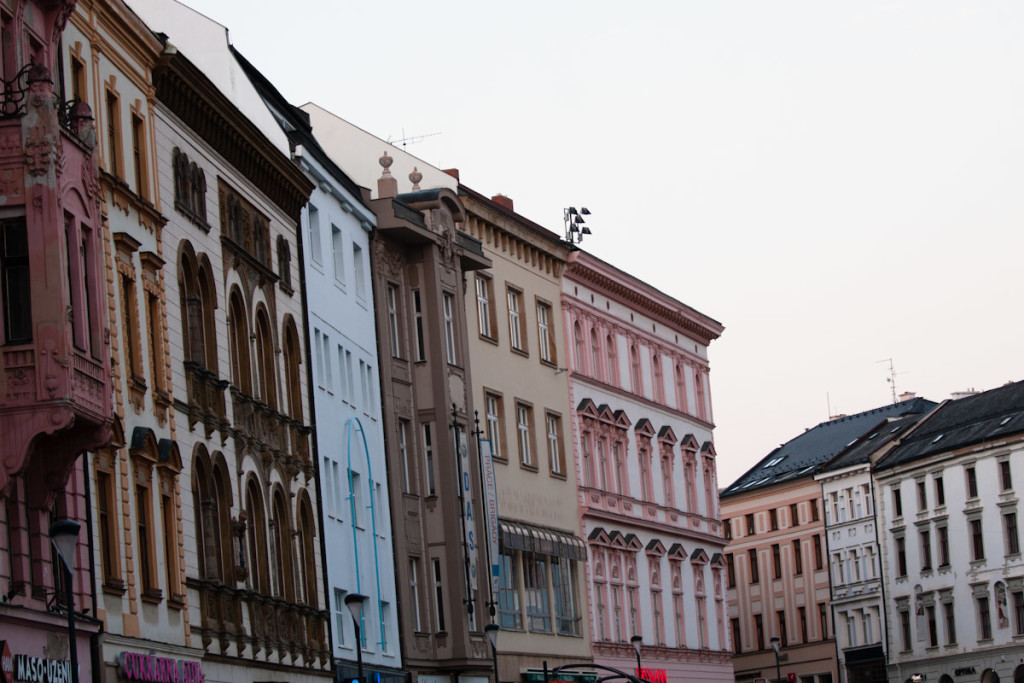 The multi-coloured facades of Olomouc

Our first mission was to locate food! On the way from Skutec the car kept us hostage, and we were afraid to do any extracurricular stops as long as the Rover baby kept on driving. So we arrived in Olomouc starving. With Andreas’ excellent food-spotting skills we found a charming café with a French name, tucked away in a quiet backyard, with plenty of cuteness and trees to shade from the sun. 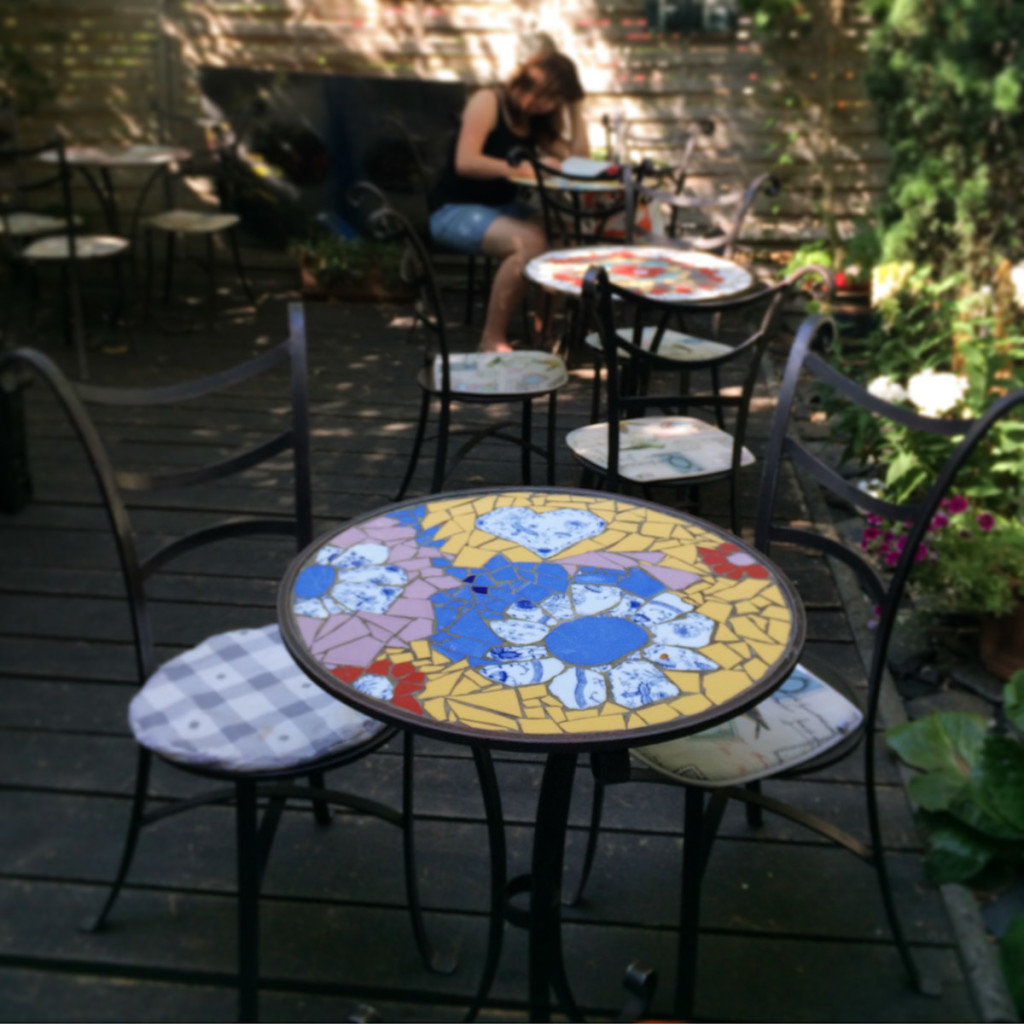 Moving down the list of Maslow’s hierarchy of needs, we put a tick on the hunger box, and turned our attention to the next basic need – shelter. A quick Airbnb search brought us to a lovely apartment right in the center of the city overlooking the charming roofs of old buildings and with a prime view to the city hall tower. Our host was the sweetest Czech family, a young couple with two most adorable kids.

Armed with local tips from our hosts, we set off to discover the city. First off, Olomouc is really small, you can walk across the city in practically 30 min. Nonetheless, the amount of cuteness we discovered was far enough to keep our travellers’ eyes occupied for a couple of hours. 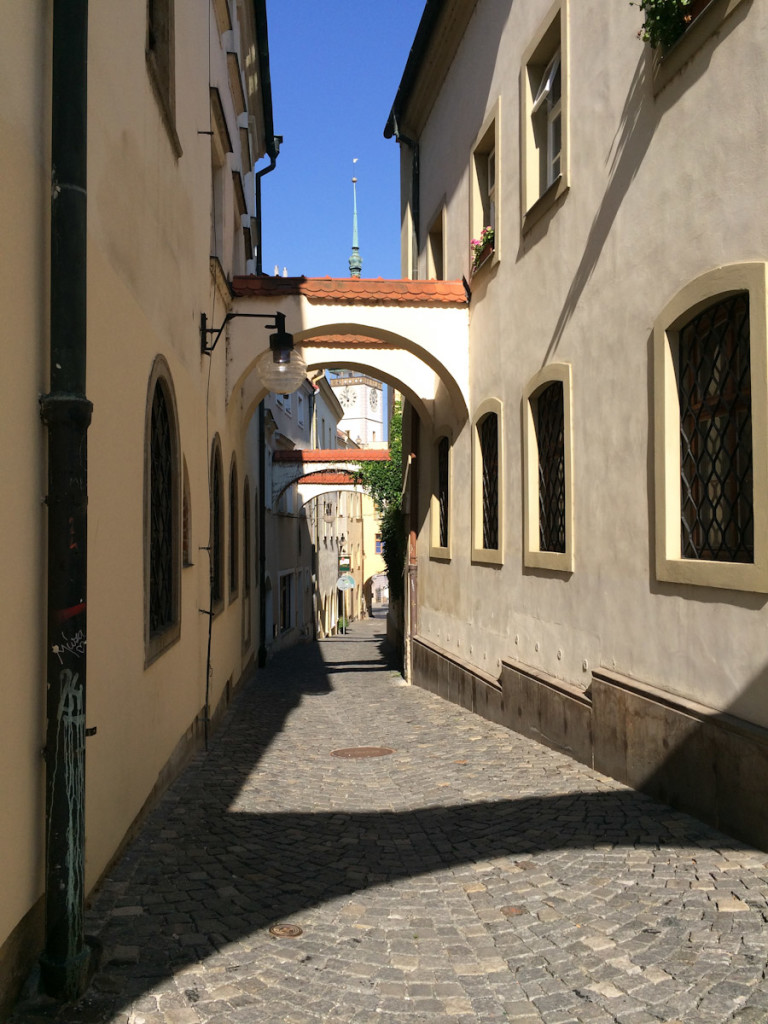 Cuteness overload. The cobblestoned streets and old buildings are a sweet sight for our eyes. 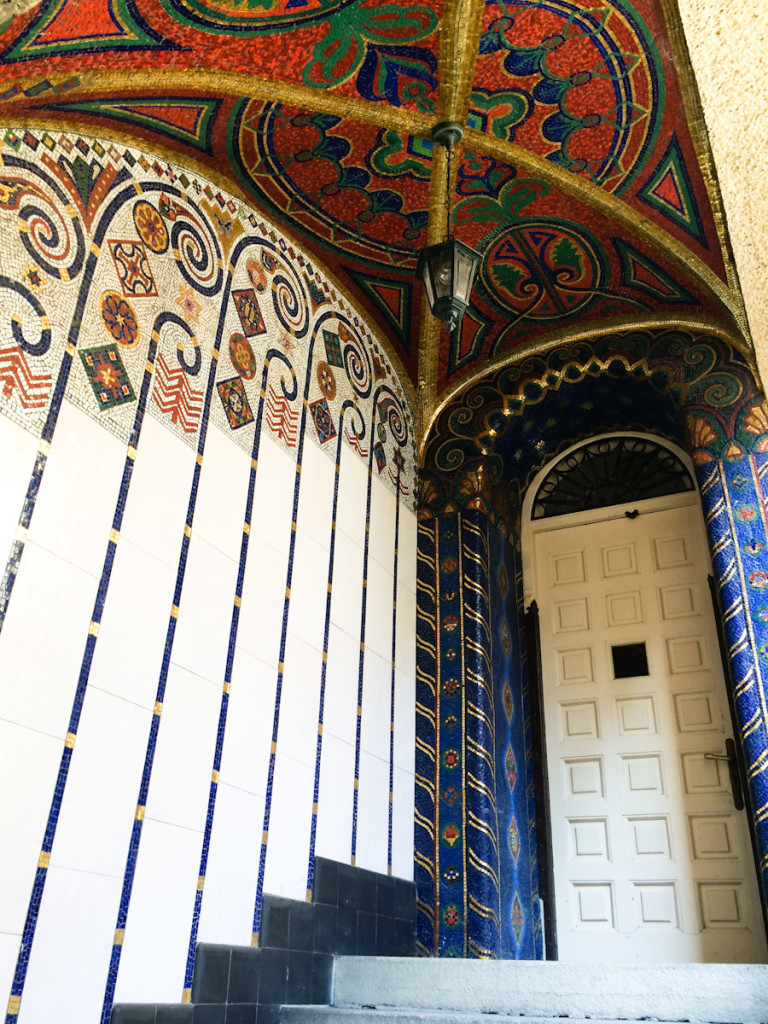 Look at this mosaic! It is incredible. From this grandiose entrance you would expect to find at a very least a palace. Hold your breath. It is a restaurant! Supposedly gourmet and all, we didn’t try it but it had a sophisticated menu and matching prices to go with the luxurious entrance. 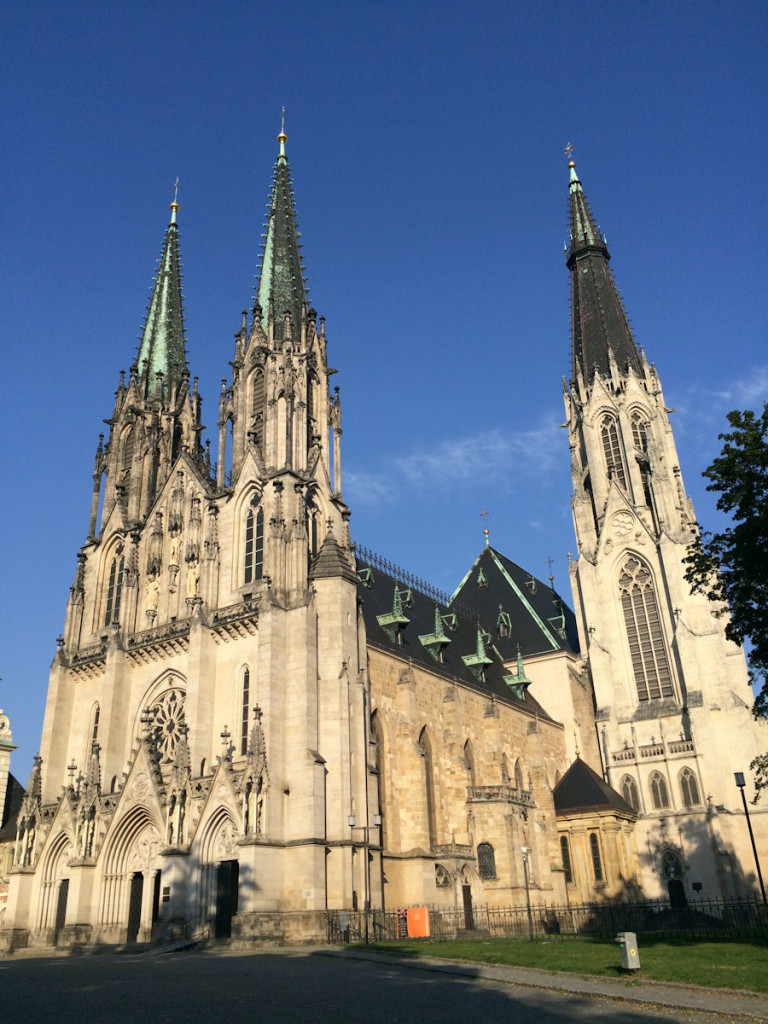 Olomouc has surprisingly many churches for a city of its size. The imposing Saint Wenceslas cathedral is set on a hill and is a nice stroll to make from the old city center. 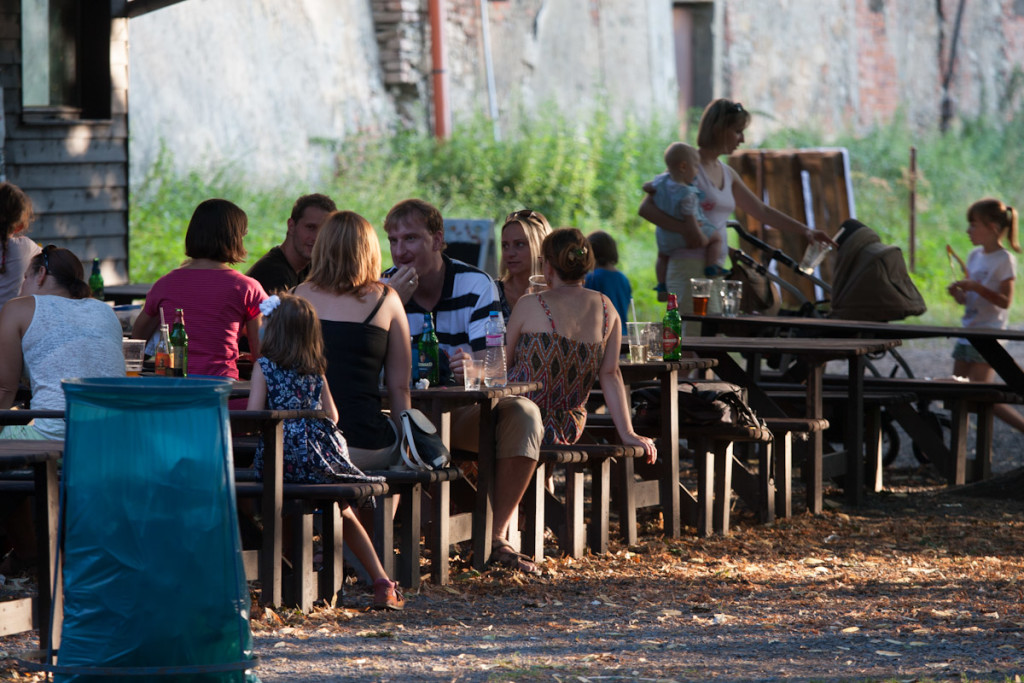 Locals hanging out in a community garden.

An abandoned venue turned into a “secret” cinema. 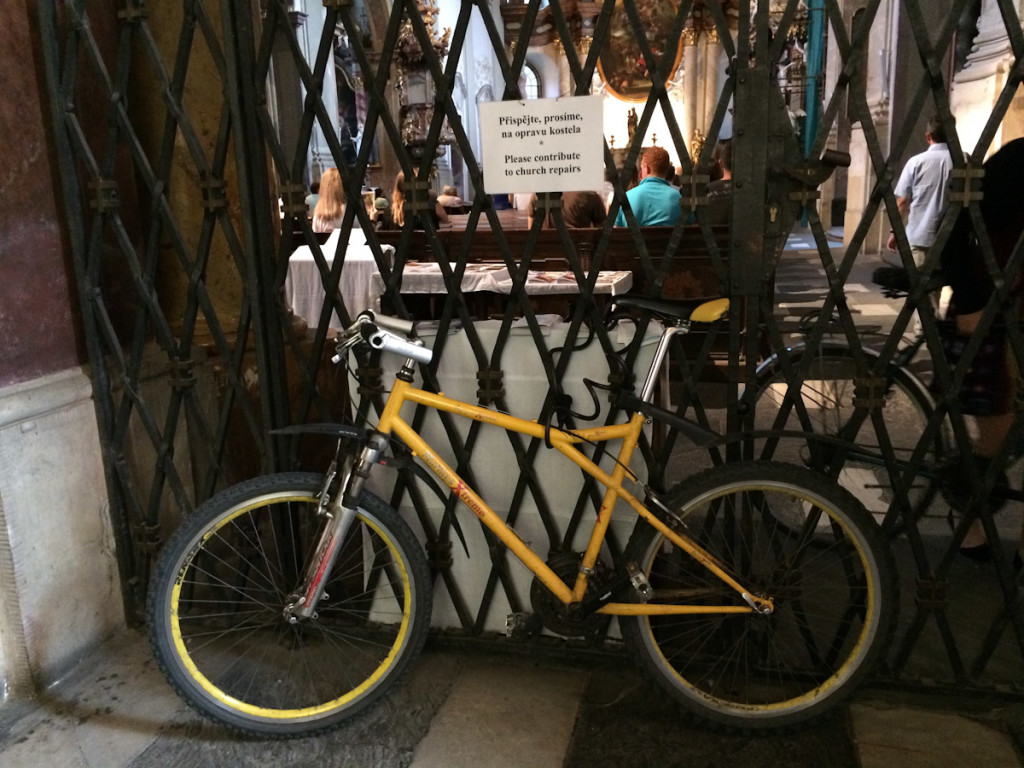 During service times, bikes get a VIP parking inside the church.

When we travel, there is always one must-do item on our itinerary, and that is to get a bird’s eye view over the place. In European capitals, there is always a good chance to find a church, a hill or on few occasions a high-rise that has a commanding view of the surroundings. In Olomouc, this old charming city, the church of St. Michael had the honour to watch over the city. As we ascended its spiral staircase the sun was about to set, spreading a magical glow all over. 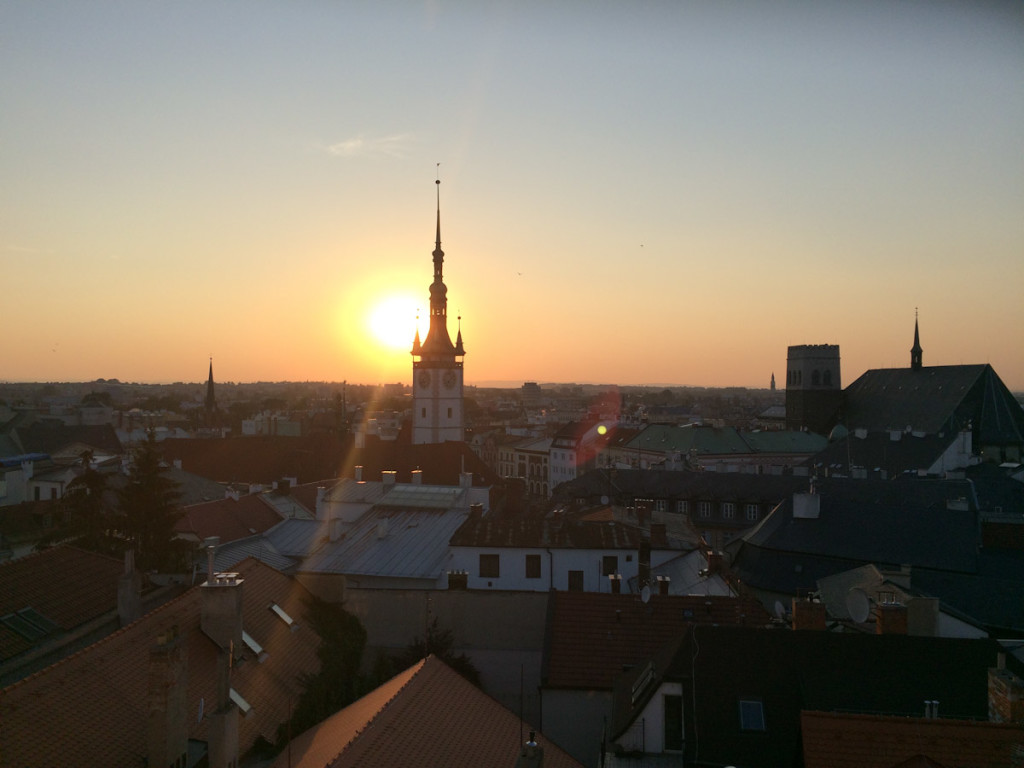 The view from St. Michael’s church.

The main attraction of Olomouc is the city hall square with its Holy Trinity Column that is inscribed in the UNESCO World Heritage List. This is also the place where we kept returning to after criss-crossing the small streets. A pretty impressive sight. 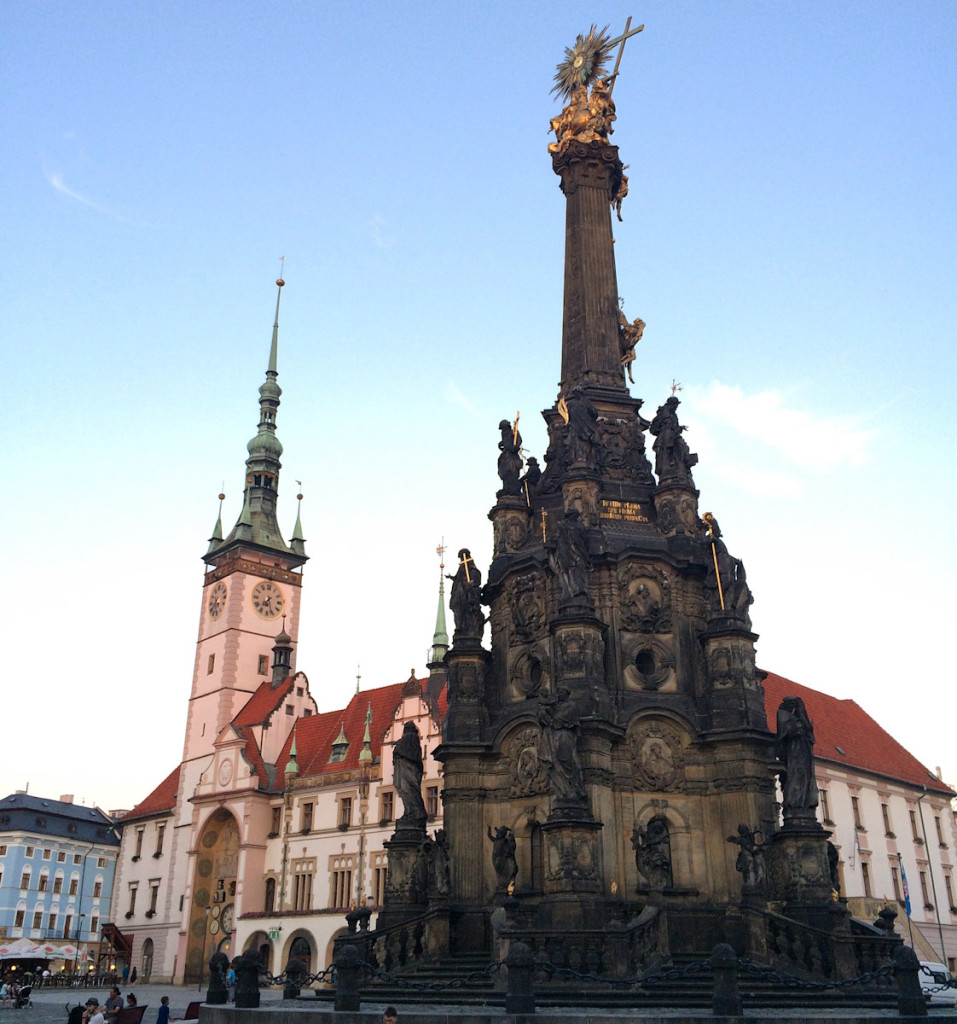 Besides the impressive column, the square has another highlight – an astronomical clock. Of course, Prague has its world-famous clock, so it would have been strange not to find one in Olomouc too. Don’t hurry to pass on judgement. It is not about copying all that Prague does. The one in Olomouc is not only astronomical, it is also very very Soviet. Yep! A remnant of the good old socialist times. As the cuckoo announces the strokes of an hour, slim figures of hard-working men and women pop out displaying the full glory and various trades of the Soviet era. 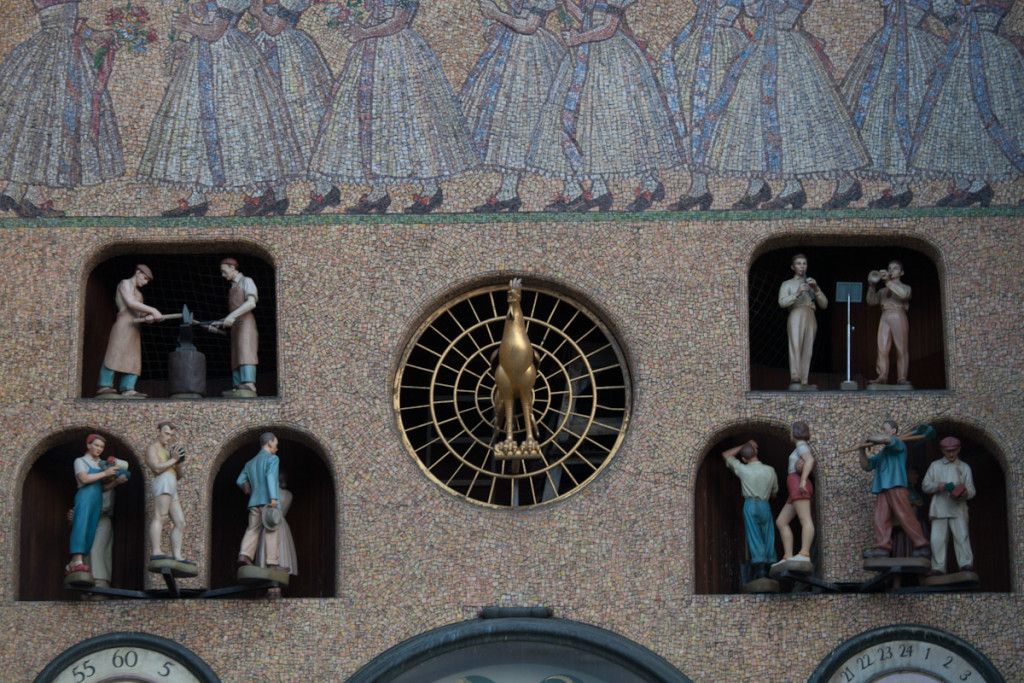 The astronomical clock of Olomouc is quite a show.

After walking around for a couple of hours we ended the day’s adventures at a popular local brewery. The Czech food, at least this dinner plate we were served in Olomouc reminded quite a lot of Bavarian food. Simple delights, no effort spent on gourmet twists. 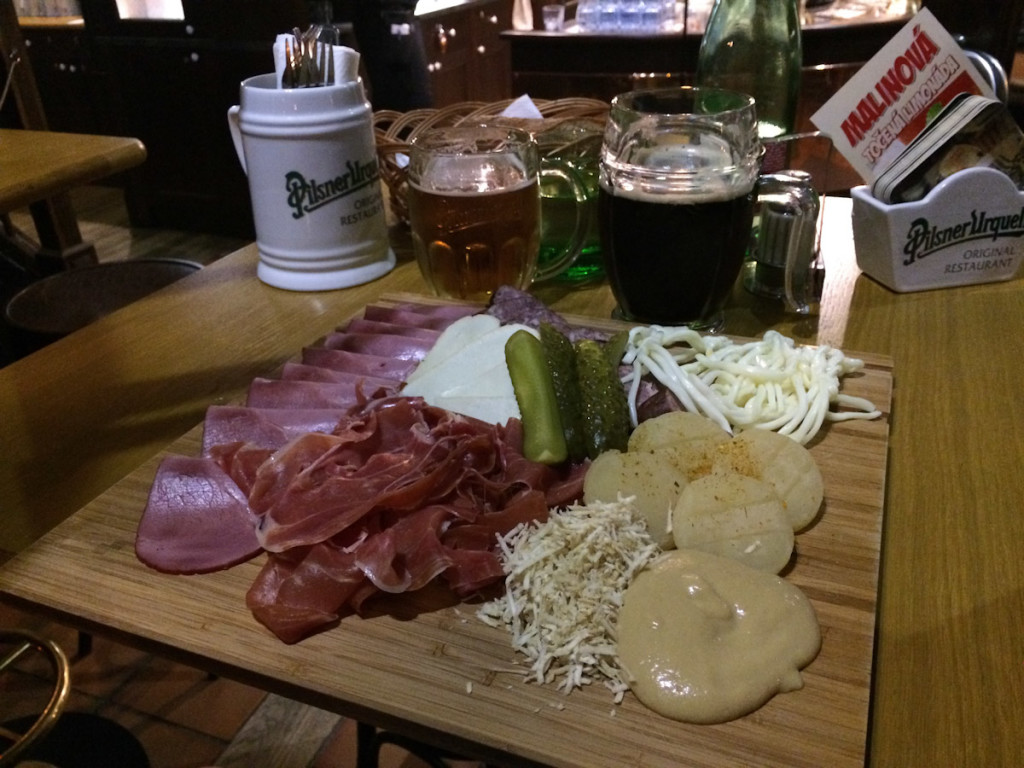 Our dinner plate for two with the complementary Pilsner of course. Na zdravi!

On our way back home we passed by the impressive square again. The bustling liveliness of the afternoon had worn off and the beautiful silence was only broken by the steps of occasional passers-by. A beautiful day spent in a beautiful city. Tomorrow new roads await us. 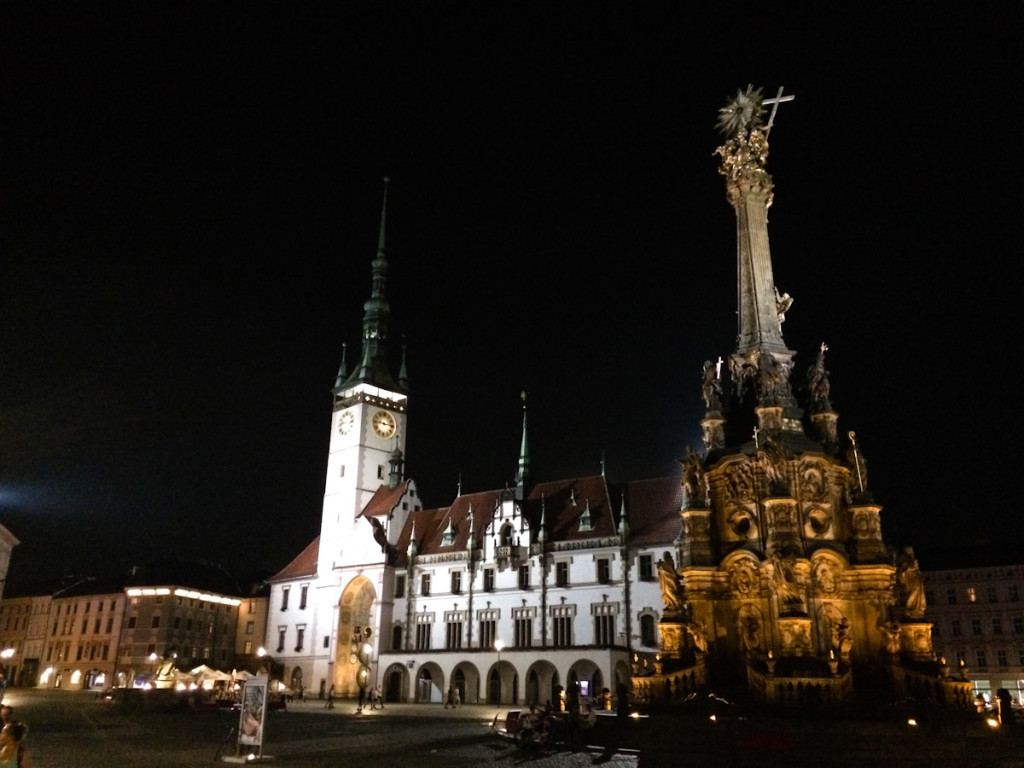