Dobroe utro from Moscow. It is another beautiful day in the Russian capital. Time to rise and shine. It sounds a bit like a newsperson on Good Morning (INSERT COUNTRY) show

It is really a beautiful day, the sun is shining, you have all of Moscow spread in front of your eyes, and a delicious breakfast with all the Russian culinary delights is waiting for you. 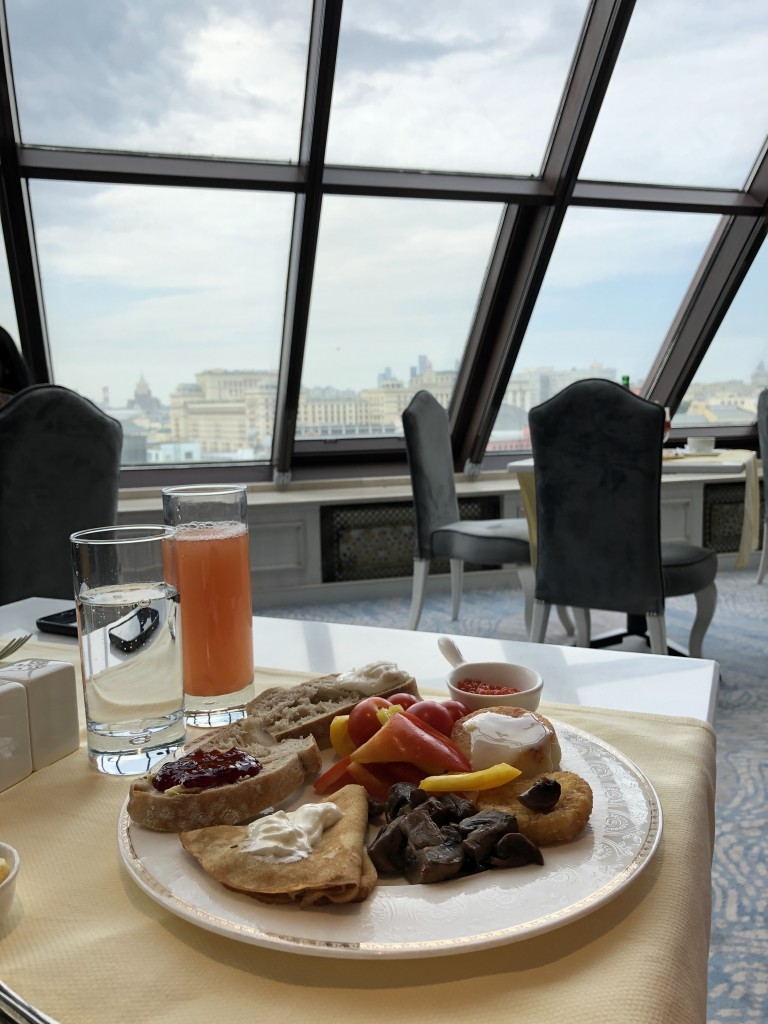 This is what one calls breakfast with a view

Let’s start the day with Nikolskaya promenade. This street has become my favourite in Moscow. The atmosphere here is just so uplifting. 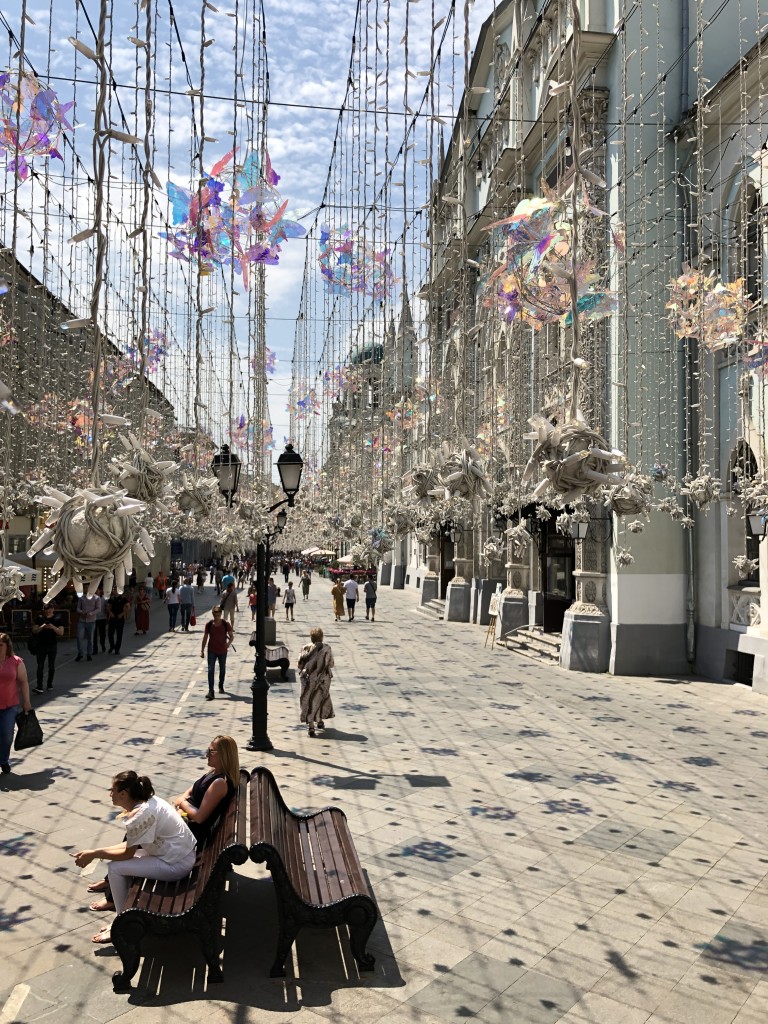 Nikolskaya Street is all about taking it easy and enjoying life

After a small promenade on Nikolskaya we take the metro to Vorobyovi Gori (Sparrow Hills) for a riverside promenade and panorama views over the city. Now metro in Moscow is a whole other level of aesthetic experience. It is not just a simple mode of transportation. There are several stations where you feel like you have stepped into a jaw-droppingly beautiful exhibition. I think that deserves a separate post on its own, so I will not dwell onto metro much here. If you are in Moscow and have a few hours to spare – do it! 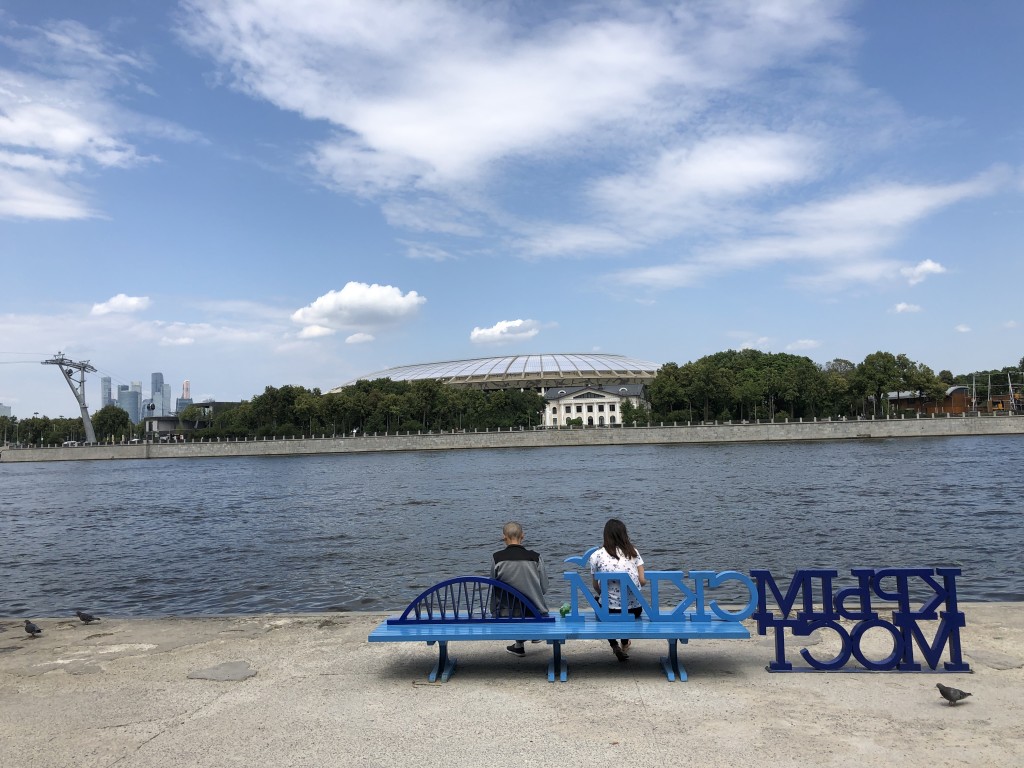 The panorama platform on top of the Sparrow Hills is not just any platform with beautiful views over a city. 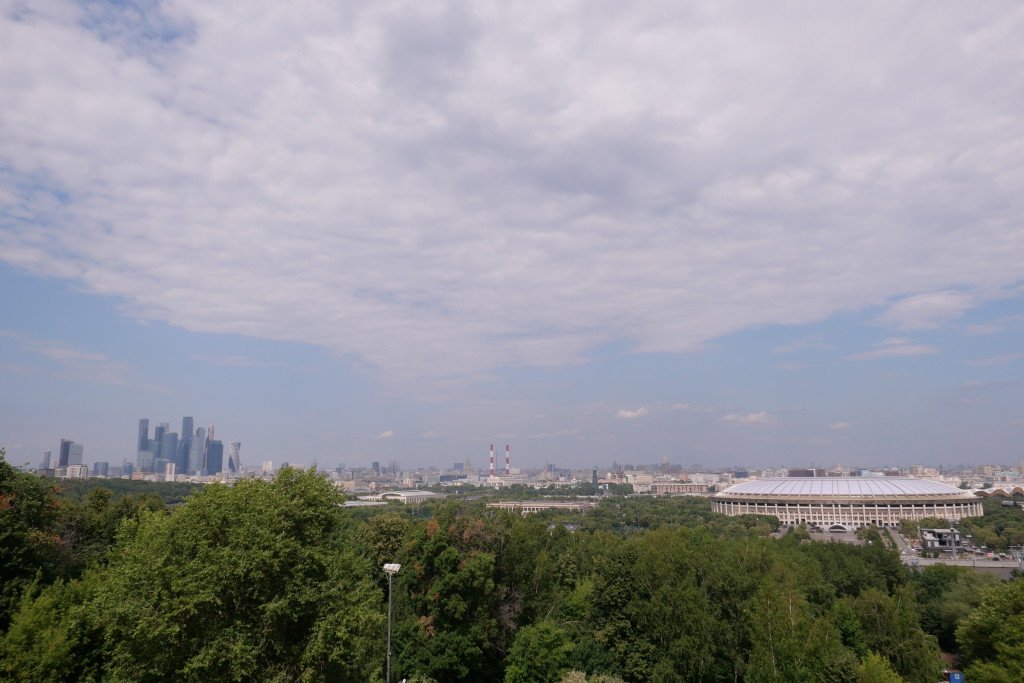 Here you meet casual passers-by, tourist groups, matroyshka (Russian traditional dolls) vendors, motorbike loving leathermen and even a cheerful and totally out of place and at the same time why not half-naked guy casually holding a WWII gun. 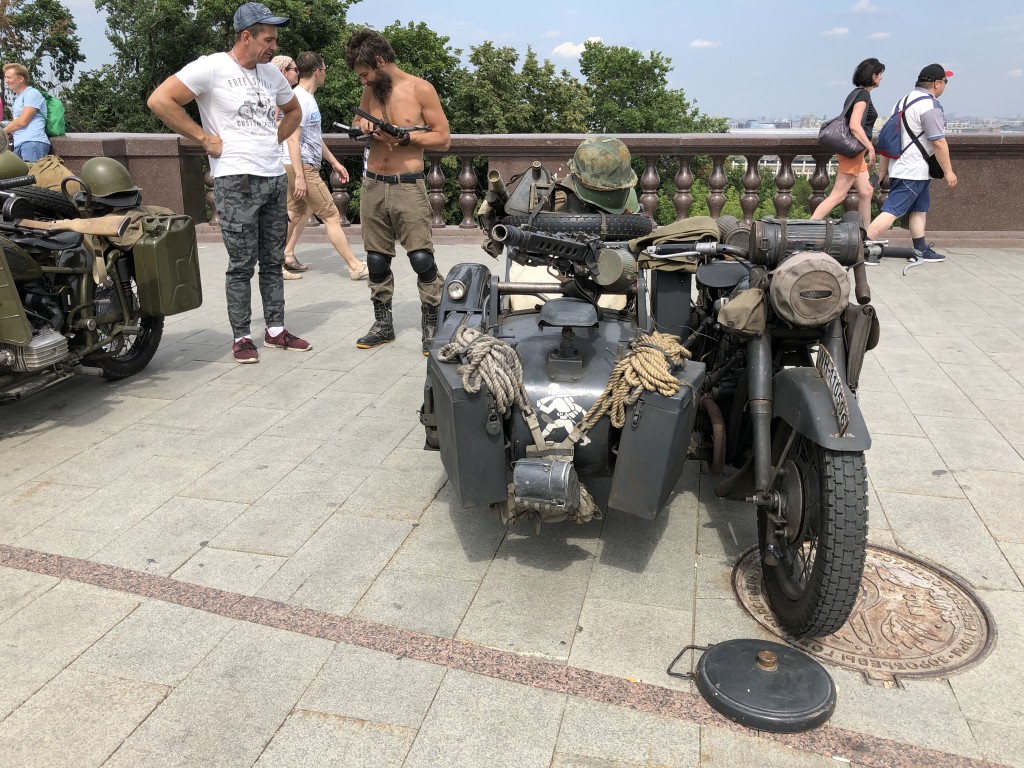 This guy! Question 1 – wonder if the gun is loaded??? Question 2 – why on earth would he be standing there? Question 3 – will the rig on this motorcycle get you faster through Moscow in the rush hour? I sense some opportunities there. 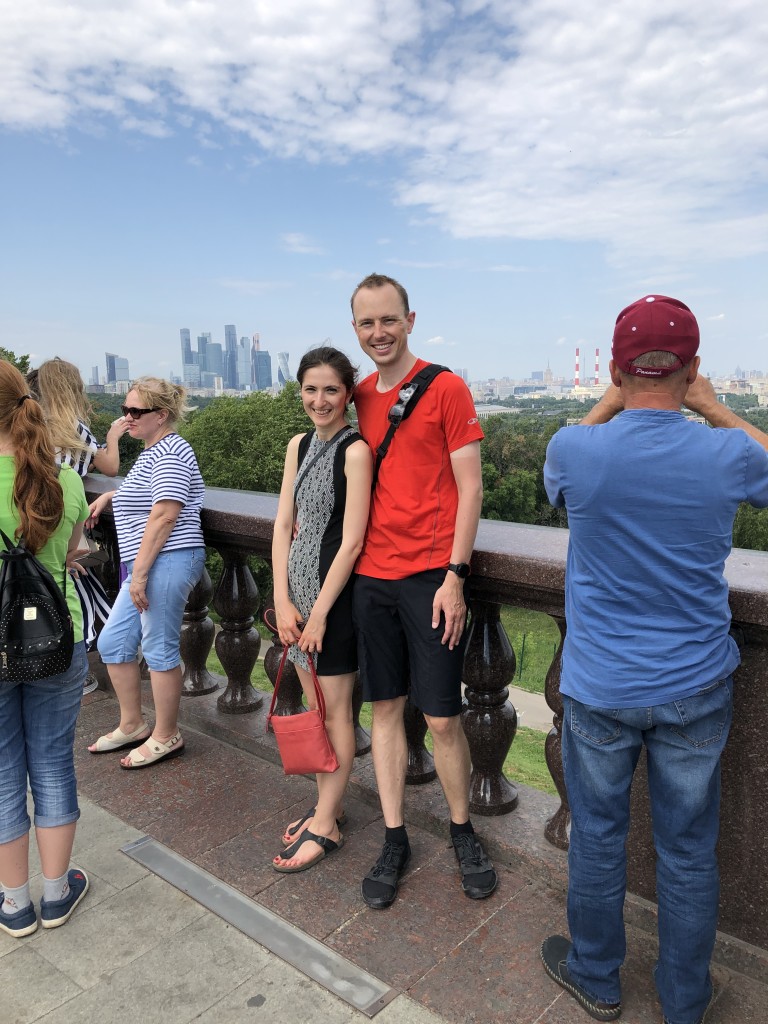 Turn your head 180 degrees and in front of you opens up the imposing building of the Moscow State University. You might have seen this iconic structure elsewhere in Moscow. Nope you are not having a déjà vu. There are seven of them spread around the city bearing the prominent name – Stalin’s Seven Sisters. 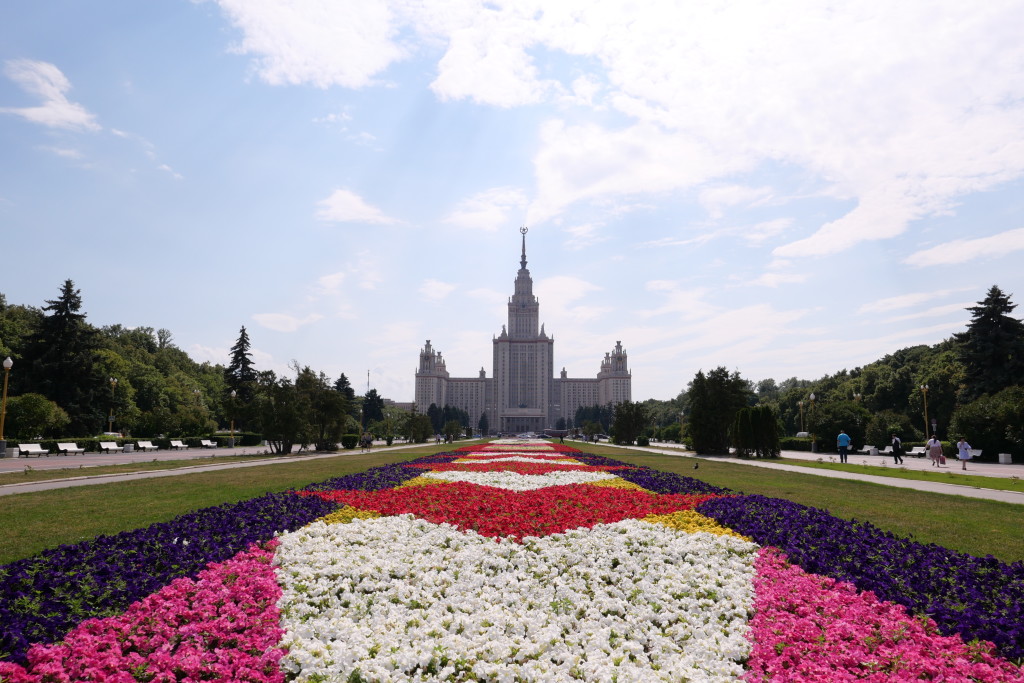 Moscow State University housed in one of Stalin’s Seven Sisters

I remember my very first time visiting Moscow back in 2004. This was one of the places where I was brought to by my kind hosts. Back then the structure felt so imposing and important and the student in me felt like it could be a cool place to study. 15 years later stepping onto this exact place felt a bit nostalgic. 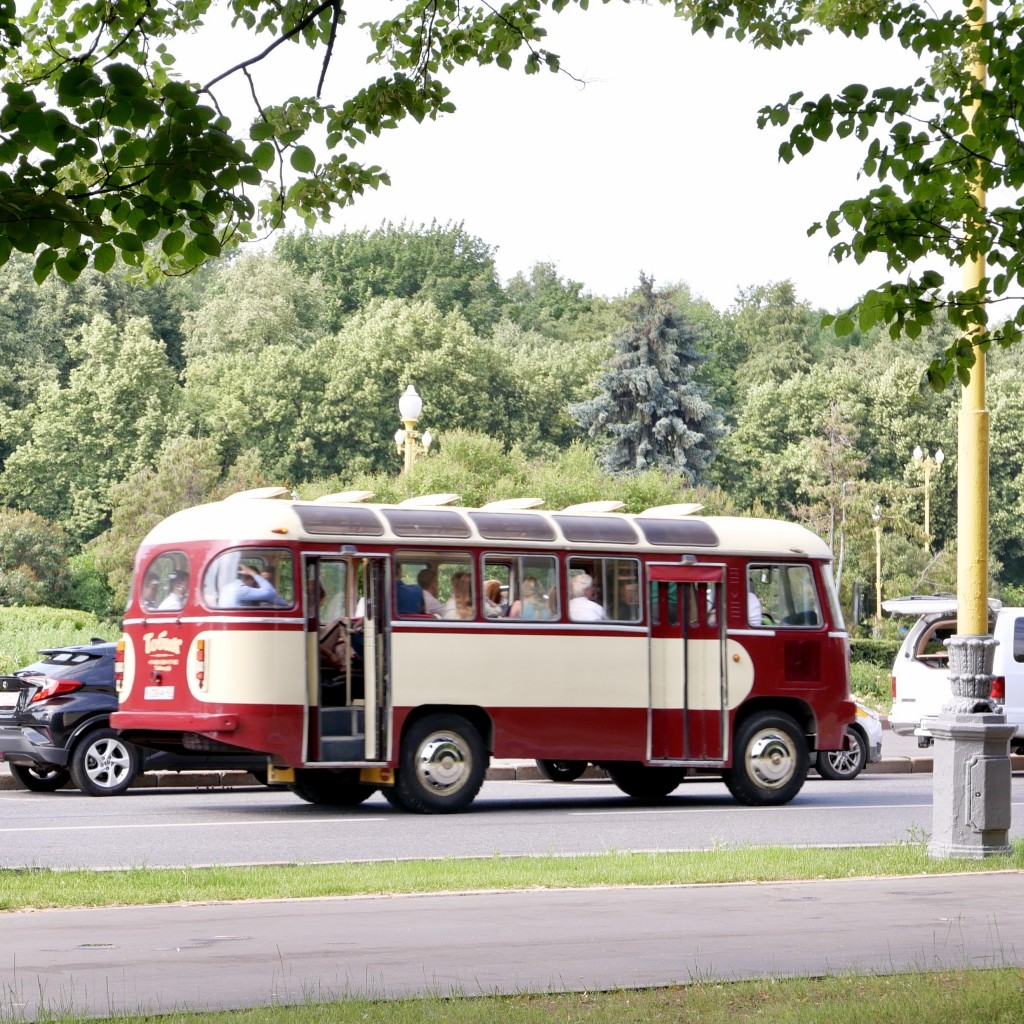 Seeing this cute bus drive by across the street from the university didn’t help the nostalgic matters much. On the contrary it only accelerated the emotions and took me right back to my school years. Every morning come snow, rain or sun I would do the 30 minute commute on one of these buses void of any modern A/C amenities to my school in Armenia and back. Though sometimes in the summer months the heat levels would go excruciatingly high, there are mostly fond memories associated with it. 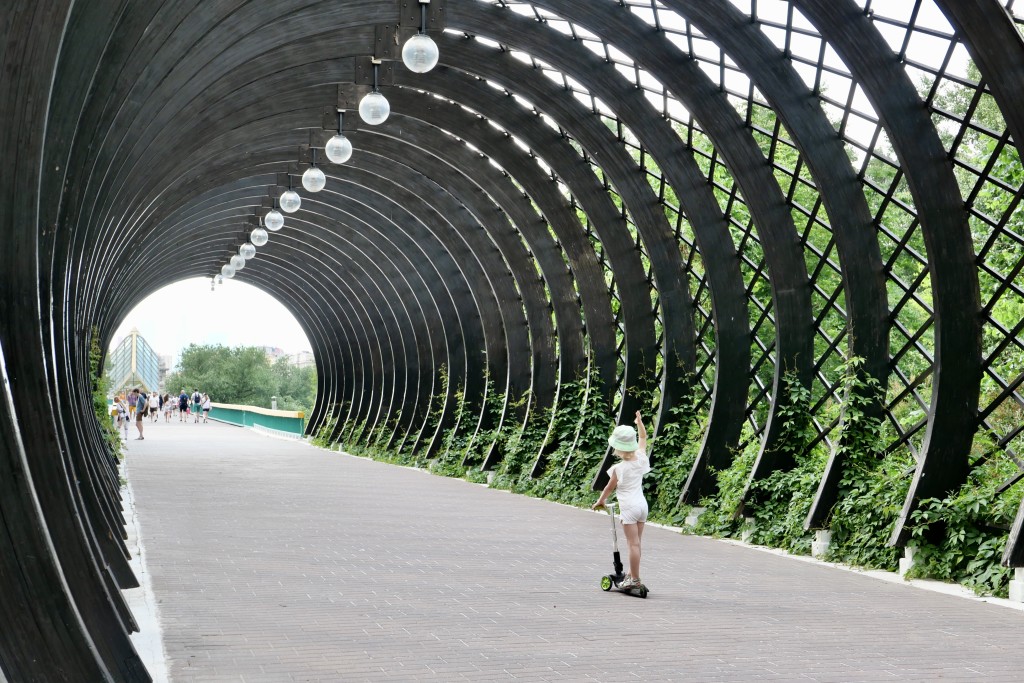 From the university we ended up in Gorki Park, place beaming with life and people enjoying life and taking it easy. The northern section of the park is home to many Soviet statue. That section we visited in the wintertime some months ago and the Soviet heritage in me was quite excited from the nostalgic feel of things. This time the focus was on the southern grounds. 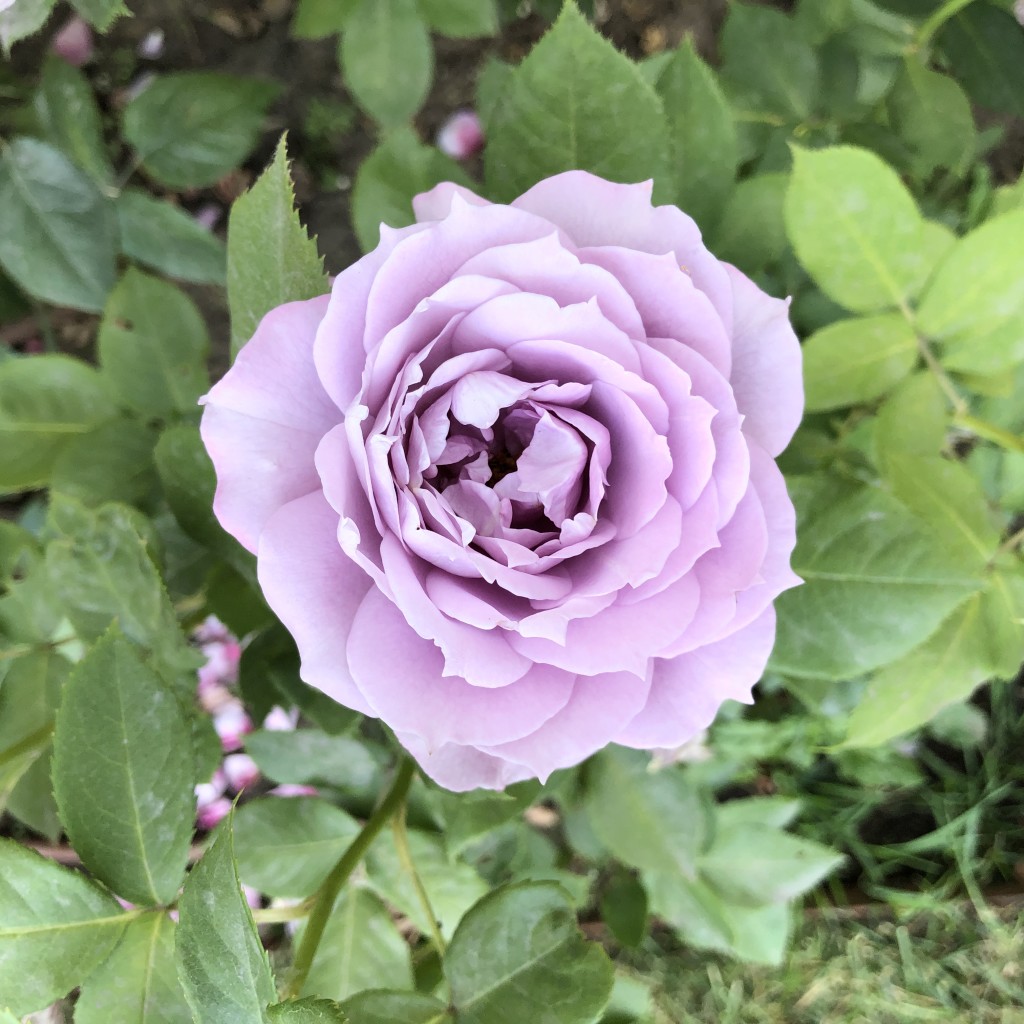 The rose garden was an enchanting sight and apparently a magnet for selfie crazed and wanna-be models. 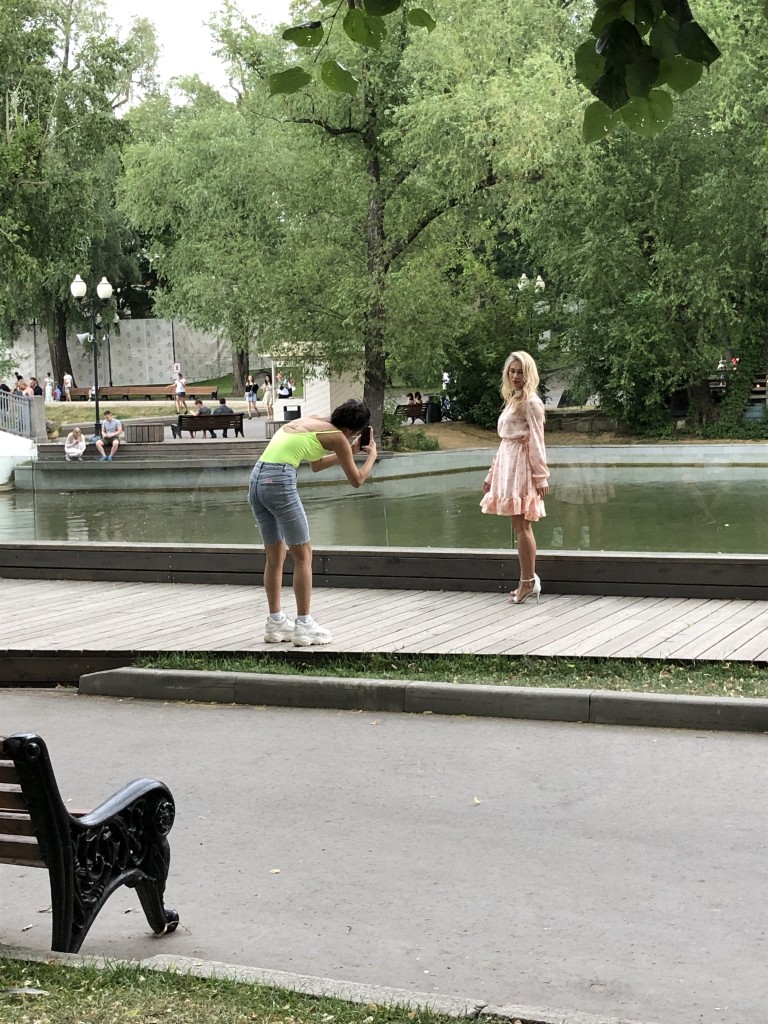 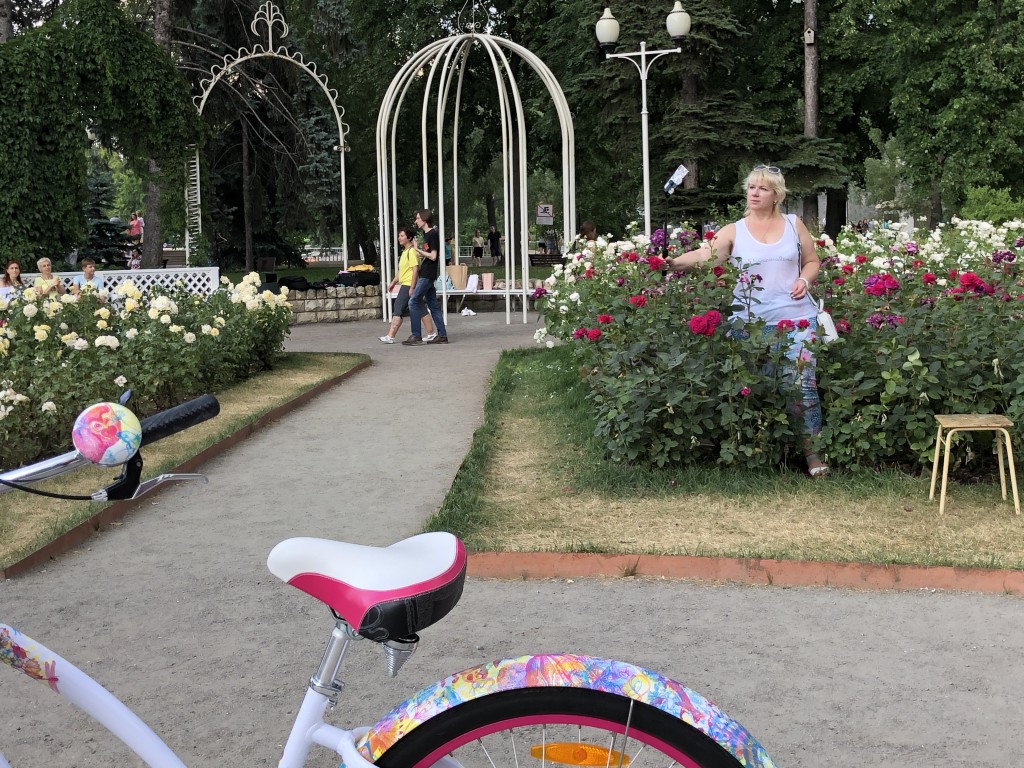 … you can quite literally take the matters into your own hands :D

The photoshoots came to an abrupt end as a sudden rain shower decided to befall upon the crowd. It was fun to see families and “models” alike running to seek cover under the tall trees. For families the priorities were ensuring the kids don’t get wet and saving the picnic food. For “models” and their personal photographers the demands were tougher as they had to rescue the hair, the dresses, and at the very last the photo equipment. 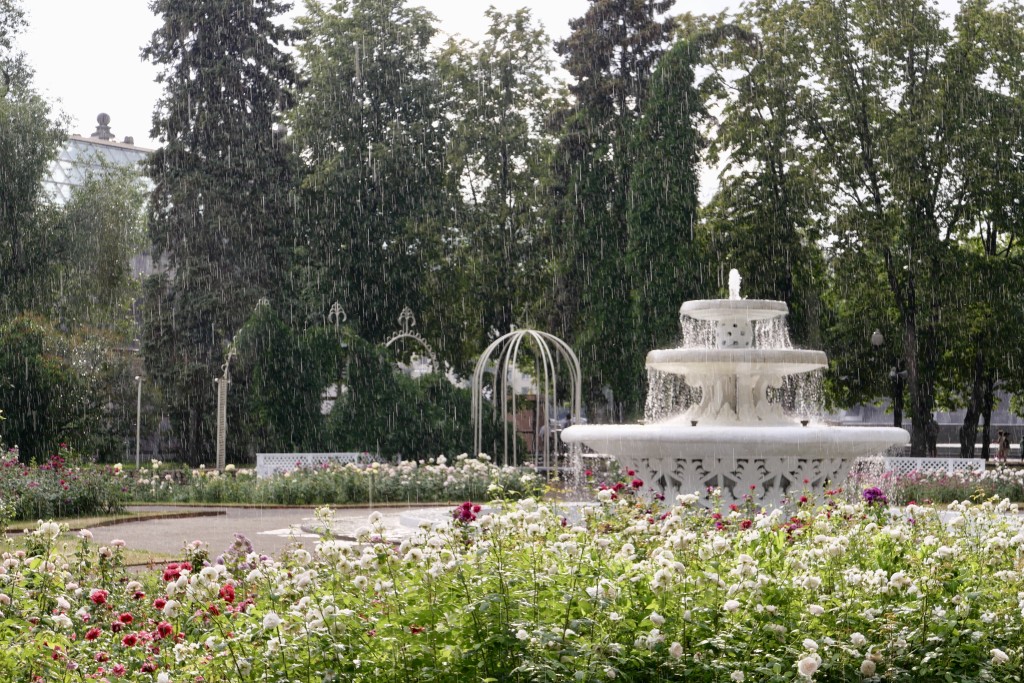 Rain showers in the summertime are quite magical

The heavy rain stopped as suddenly as it started and the sun came shining through the clouds. People appeared quickly out of their covers to continue their strolls, picnics, songs, chats, and dances… 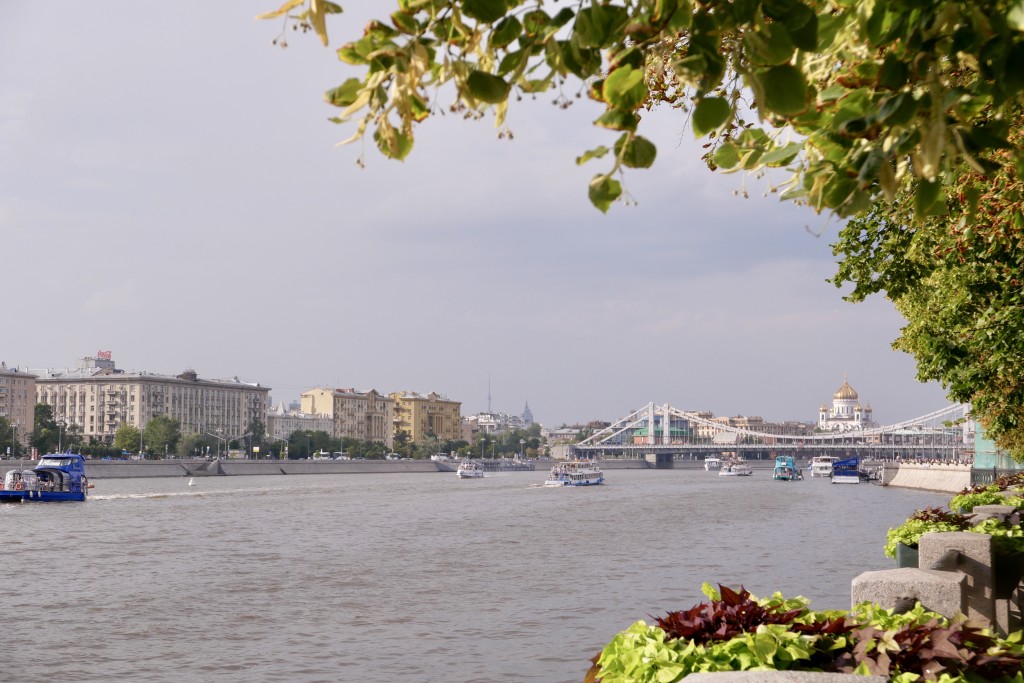 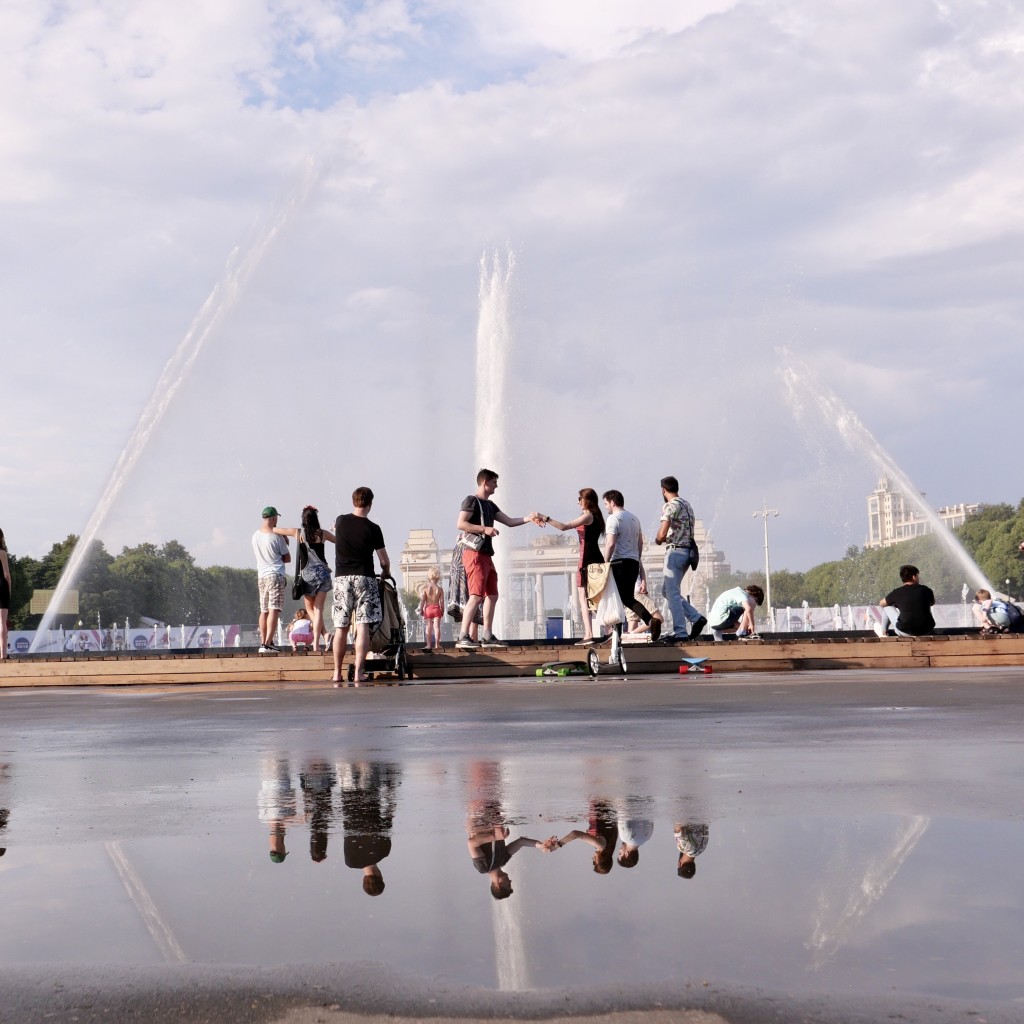 Impromptu dancing by the dancing fountains

After hours of walking and some 20.000 steps, the last stop of the day was of culinary nature. An exciting dinner experience was waiting in one of the world’s best restaurants – Twins Garden. Each of the dishes was quite a special treat. My absolute favourite was the baby sturgeon. This is where I should quickly add – pause NOT. I literally squeaked in terror as the waiter put the dish in front of me with the sturgeon staring right into my face. The fish was quickly beheaded to ease my conscious. 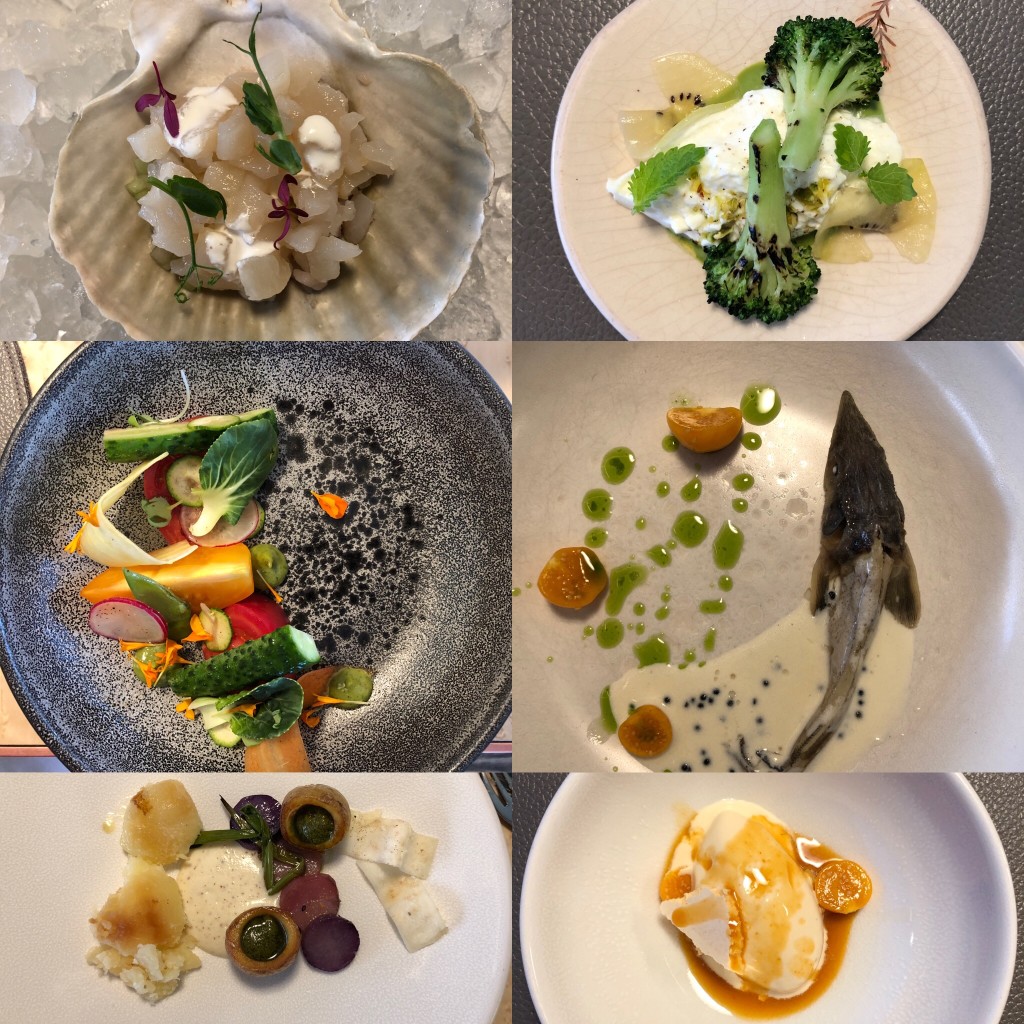 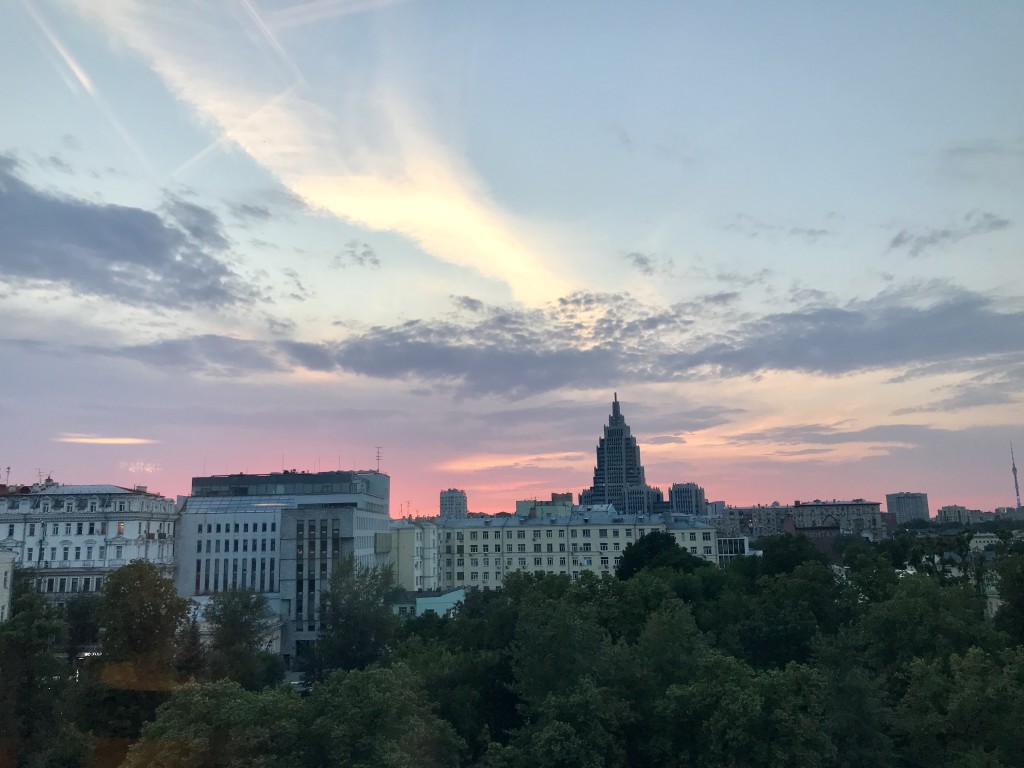 Magical sunset paired up well with the dining experience.

A few hours and several culinary delights later we ended up where we started the day – in our hood at Nikolskaya Street. 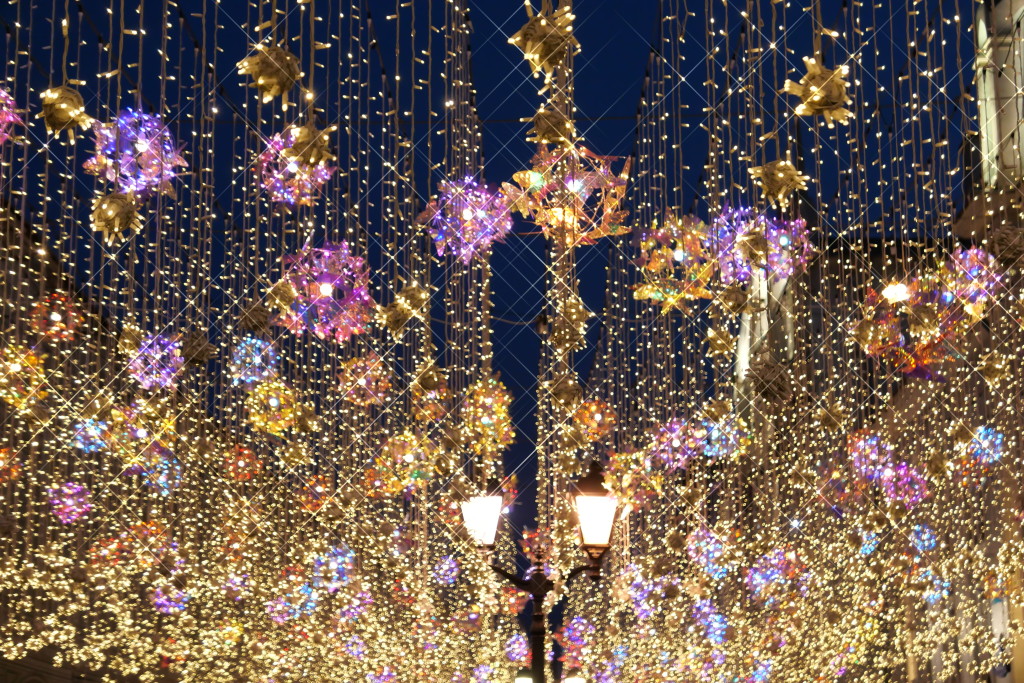 What a magical sight!