Hallo! After 2 days spent in our wonderful Berlin we are ready to hit the road. The bags are packed, the car is tanked, and it is time to say good-bye to our lovely hosts – Miro & Isabell. 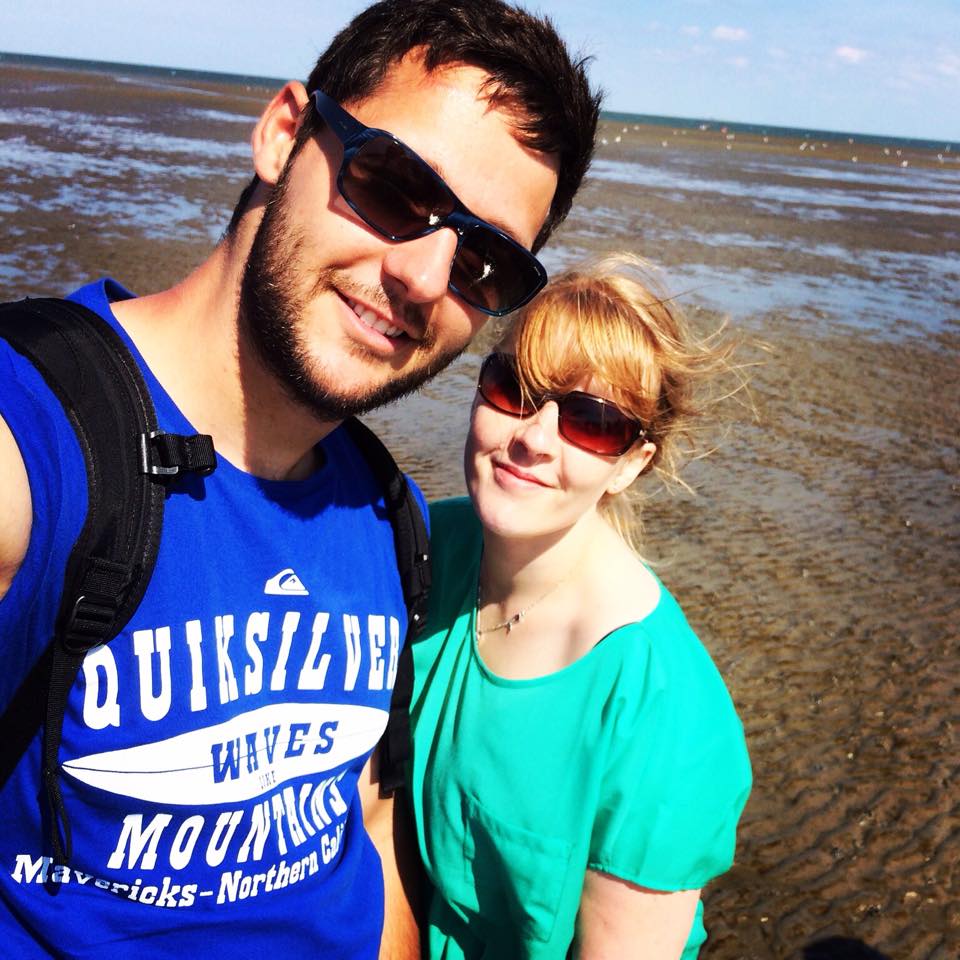 Miro is from Bulgaria, Isabell – from Germany, and now they call Berlin their home. Their love story is a beautiful one, I will just say that they had to travel all the way to Alaska to find each other there <3.

I first met Miro in 2010-2011 at my Deutsche class, when Andreas and I were living in Berlin. He was one of the most hard-working students in the class, on par with me (I am modest I know), and that is how our friendship was struck. I like hard-working people

Miro is also a crazy bike enthusiast, he probably averages around 100 km a day or more, which according to my standards is insane and worthy of a trophy! So if you are ever in Berlin, you might bump into Miro, the famous cyclist of Berlin. Isabell is the sweetest English language/history teacher. She is probably the most diligent teacher in Germany, she puts so much care and love in her lesson preps, that one should seriously envy her students. Isabel is less into biking and more into hiking/strolling, which suits Miro just fine.

These lovely friends of ours became our first hosts of the road trip, and we couldn’t wish for a more wonderful start of the trip

Fahren fahren fahren auf die Autobahn. The course is set towards Basteigebiet, the last German stronghold before reaching the Czech border, the country #3 on our list. 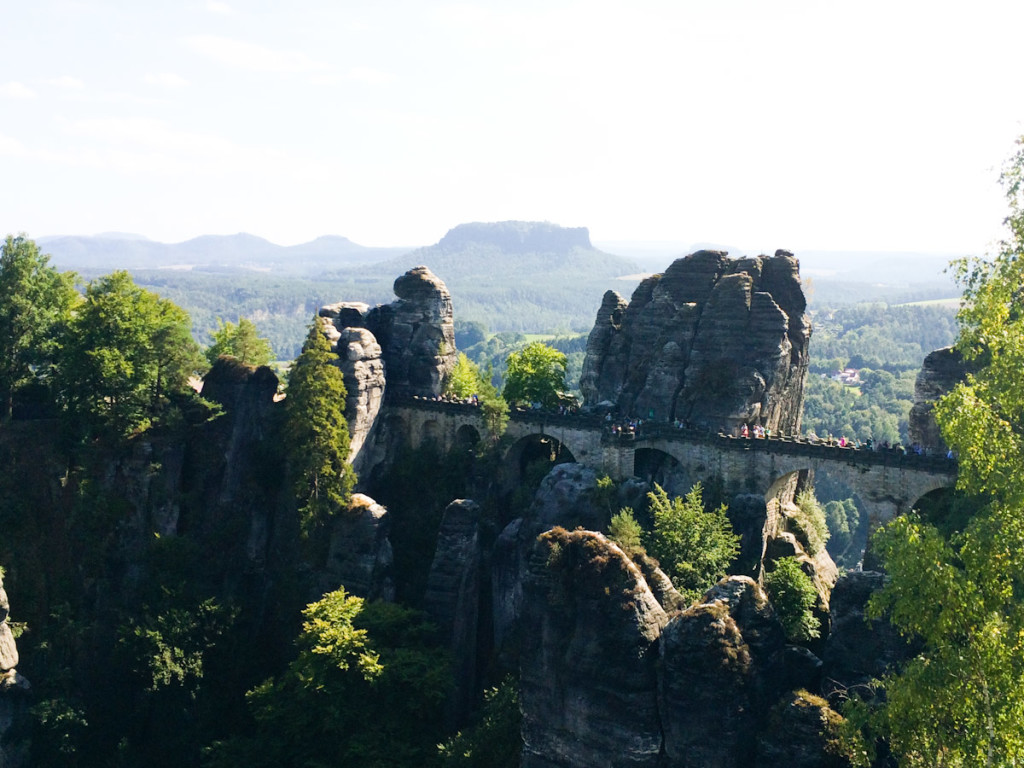 The breathtaking scenery of Sächsische Schweiz

Basteigebiet is an incredible bridge built in the rock formations in the natural park Sächsische Schweiz reaching across the border into Czech Republic. We heard about this place some years ago when visiting Dresden but couldn’t make it there at that time. Now the opportunity presented itself on a silver plate.

Sandstone rocks were eroded millions of years ago and now stand as breathtaking columns. To ease access for the less adventurous visitors, a wooden bridge was constructed in the early 19th century. The heavy load of the visitors called for a sturdier construction and in the 1800’s a sandstone bridge was built between the columns. Today the number of tourists feels nearly as breathtaking as the view. 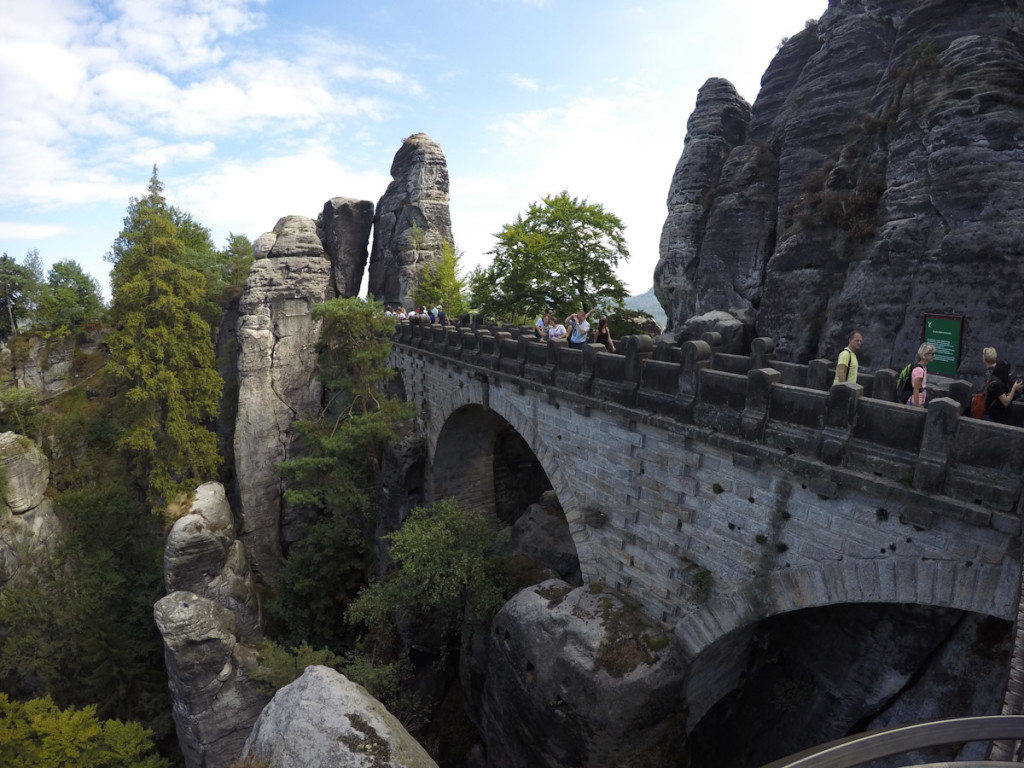 The bridge, the rocks, the view across Elbe and the plains were incredible, however the place felt a bit crowded. Probably visiting it in the 1800’s would have provided a nicer thrill of adventure than walking on the bridge together with an army of hundred others dominated by Chinese groups and selfie stick couples. Nevertheless, it is quite a thrilling sight especially from a distance standing in a secluded corner and taking in the view. 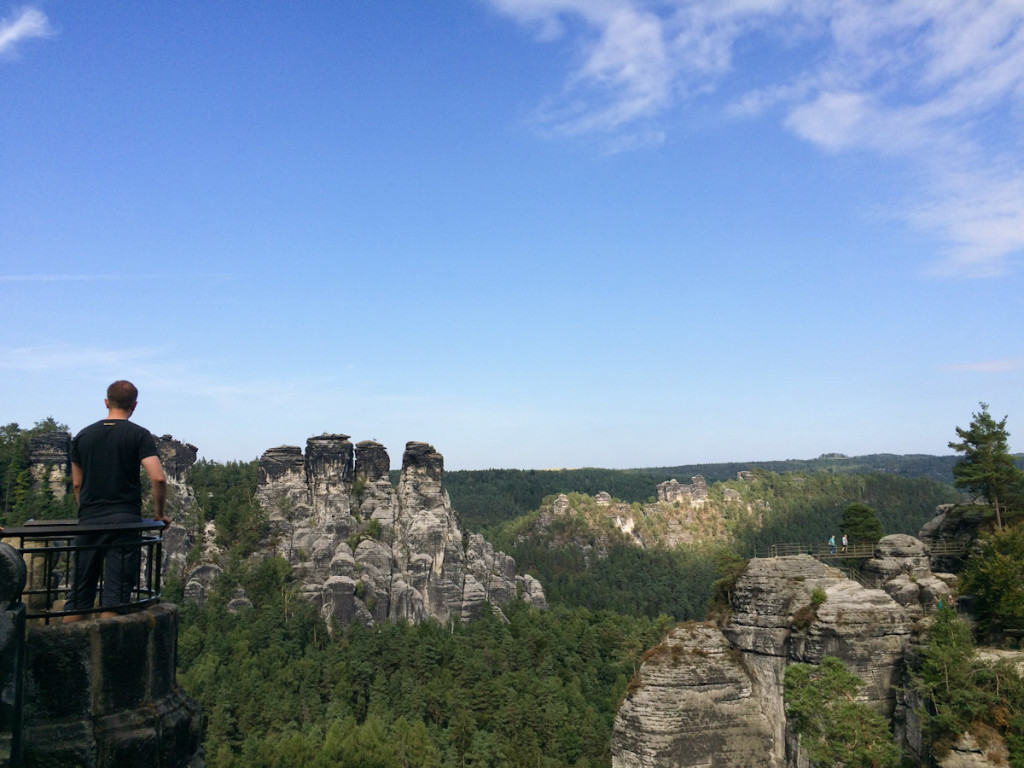 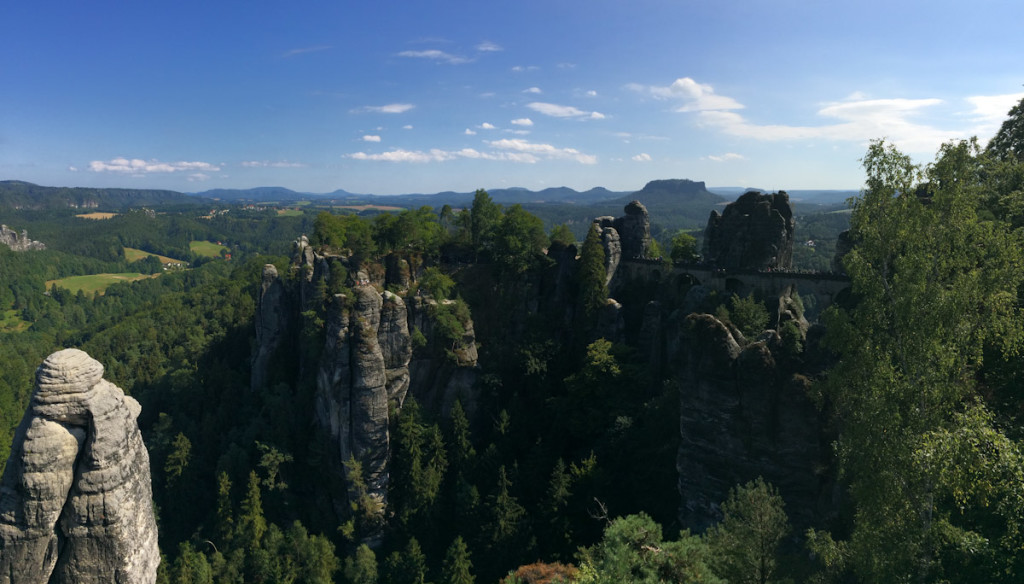 After making our way back through the hordes of tourists it was time to refuel our own engines. We found a small selbstdienst cafeteria just by the entrance to the bridge. To put it in a nutshell, it was a bit dodgy food featuring deep-fried schnitzels from a place run by funny ladies and overruled by angry wasps. The only good thing about that place was the commanding view of the valley. Shame it was spoiled by this joint.

Time to get back on the road. The first international border is waiting to be crossed. Ahoj Czech Republic! First off you need a vignette of course. It is only Germany that allows foreigners to borrow their super nice highways free of charge, probably not for much longer though. 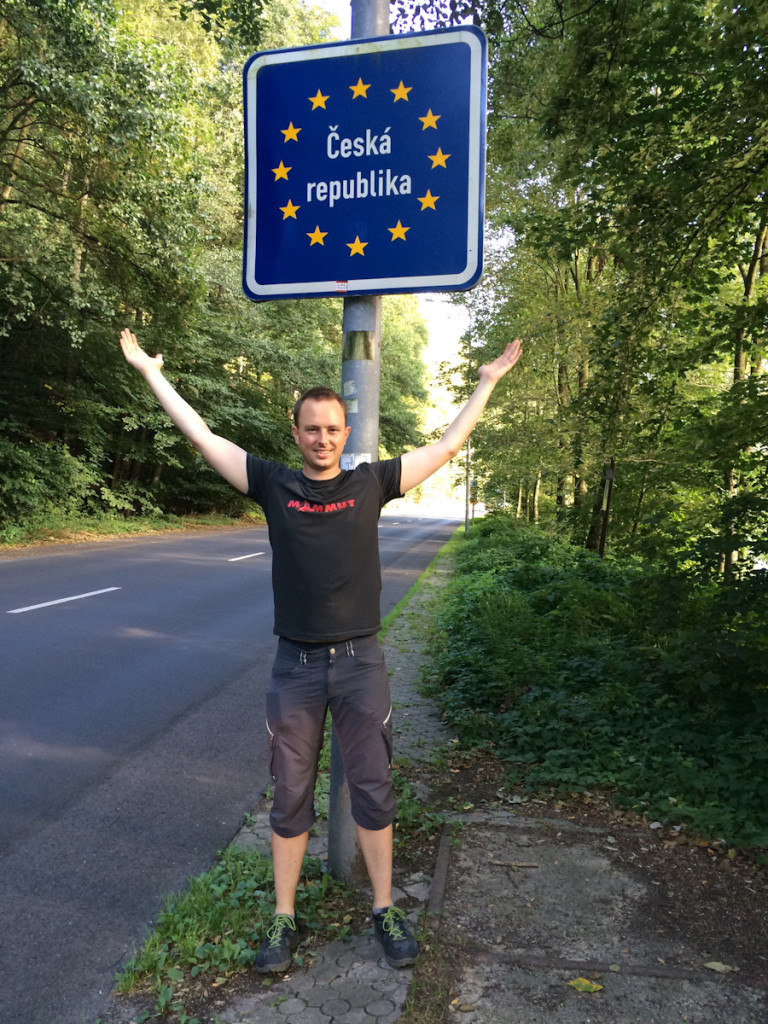 Crossing the German-Czech border was smooth as always in the EU, we barely noticed the small sign indicating the change of countries and the imposing structure in dull concrete. Andreas was very excited at the sight of the former customs station that barely had energy left to give us a wave for a safe journey. 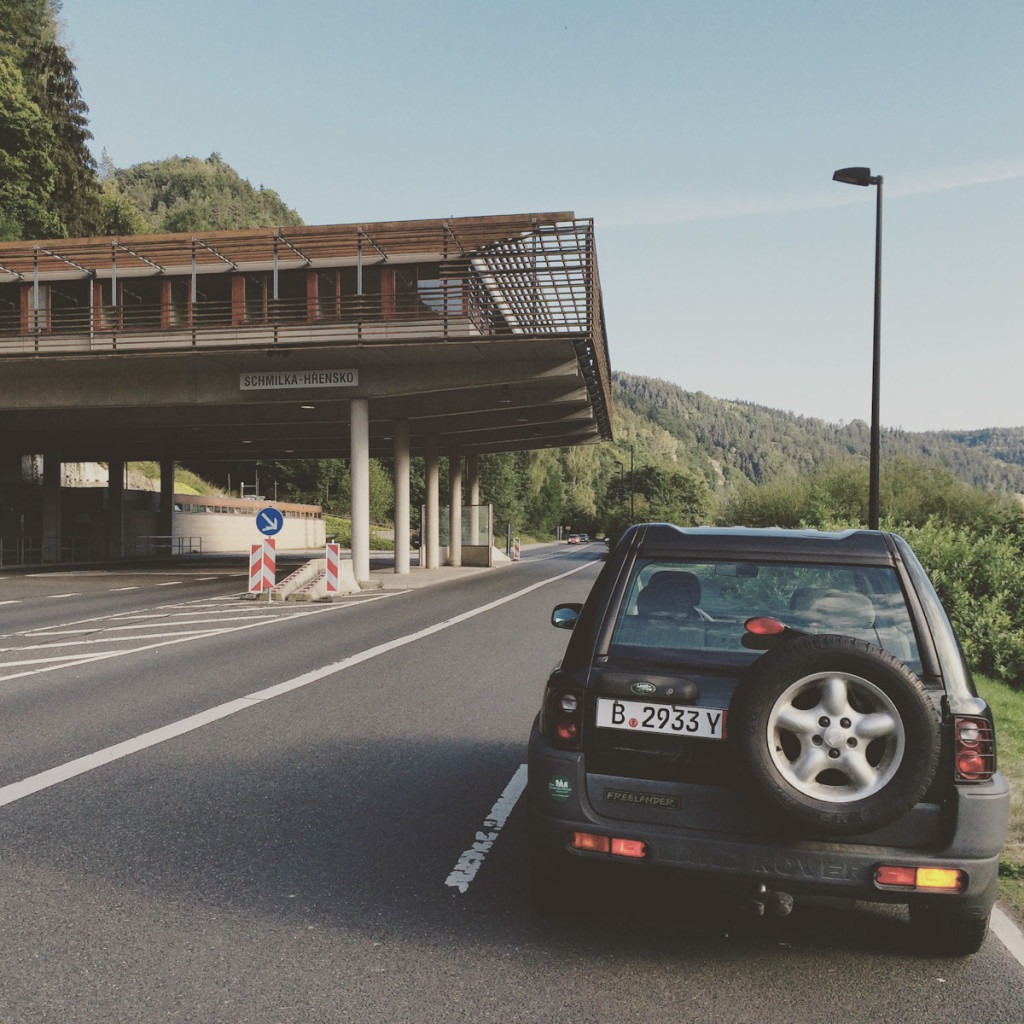 The German-Czech border crossing or what is left from it.

Just across the border we found the next stop on our itinerary: Hrensko. Supposedly a small village with traditional brick and timber houses, instead we found a local version of the Chinese markets we frequented in Beijing. Later we learned from our hosts in Zlin, that the cheap Chinese goods are in high demand with the Czech people. Who would imagine?! 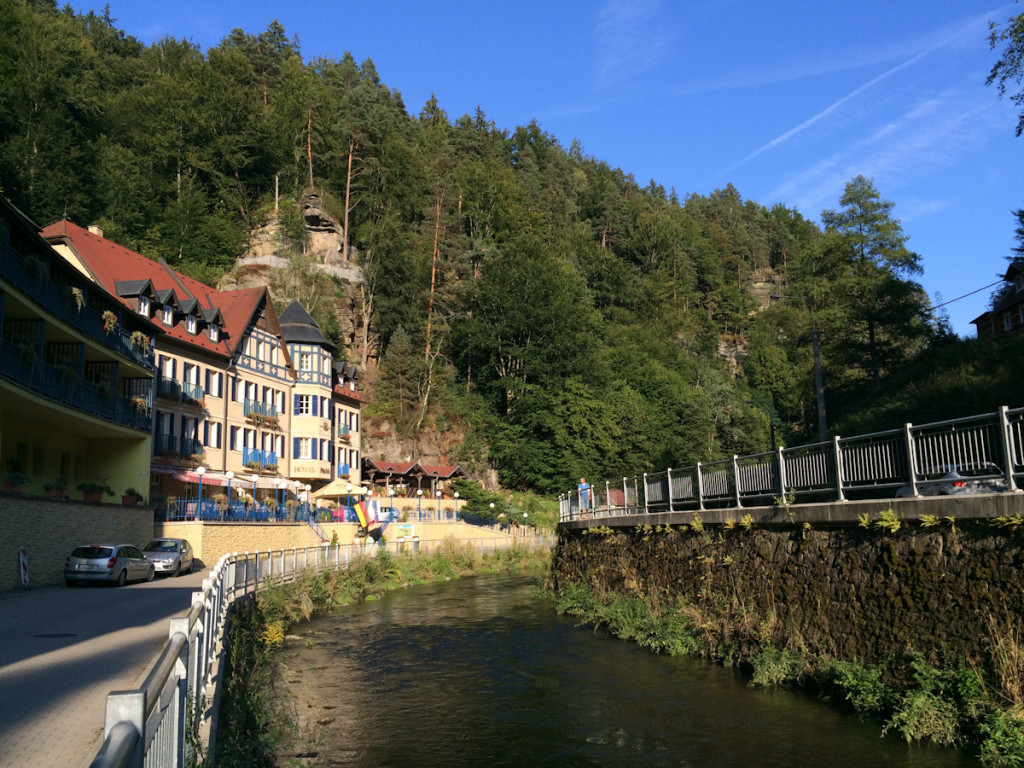 Hrensko – the timbered houses that we were looking for turned out not to be quite so spectacular. 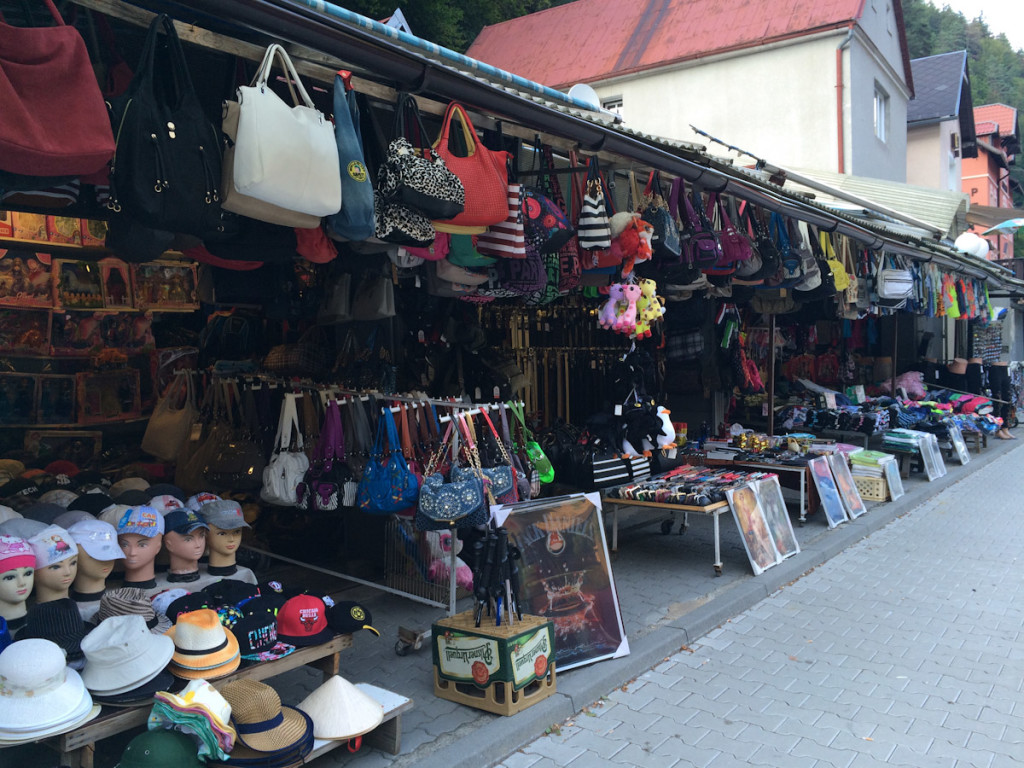 The apparent landmark of Hrensko – the copycat Chinese market.

Looking closely behind the seemingly endless rows of cheap merchandise we did notice some traditional houses, but all the charm had been lost with the Asian invasion. In one of the local restaurants we enjoyed a local specialty of three sorts of schnitzel! Together with us there was a very merry crew of Germans that made it across the border for a cheap dinner and some local schnapps. They were quite an amusing sight worthy to have been photographed for memories.

When leaving Hrensko the car started to misbehave just after hours of buying it. In the moment of panic on my side and trying to keep it cool on Andreas’ side, he put on his favourite headlamp and opened the hood of the car to locate the point of cause. After feeding it some lovely motor oil, we resumed the drive. Little did we know that motor oil was not the point of cause and that the first signs of a motor shutting down while driving would become quite a troublesome mystery keeping us stranded in a small city for days to come. But I am running ahead of things… 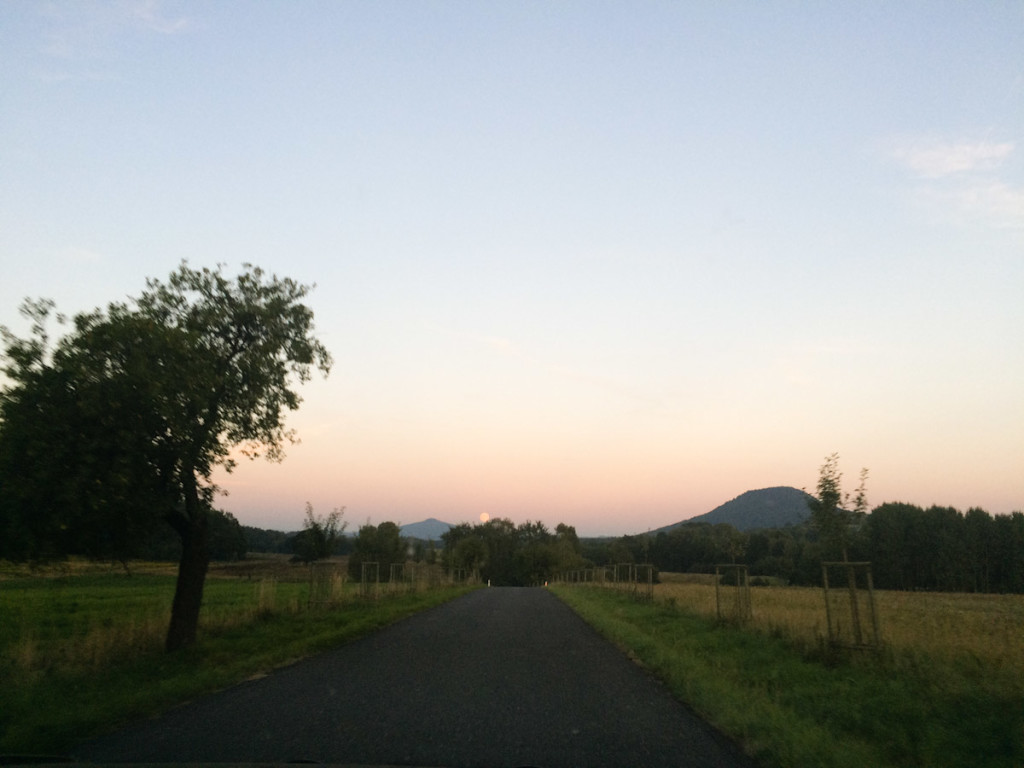 On the Czech roads…

Back to the Czech roads. We still had some kms to cover and the night was catching up. Apparently when booking our stay for the night we had misjudged the map and ended up booking a place that was much farther from the destination we initially wanted to find us at. After spending a few long hours driving through the Czech hills and forests we have finally arrived at the hut little past midnight. Fortunately our kind host was up waiting for us.